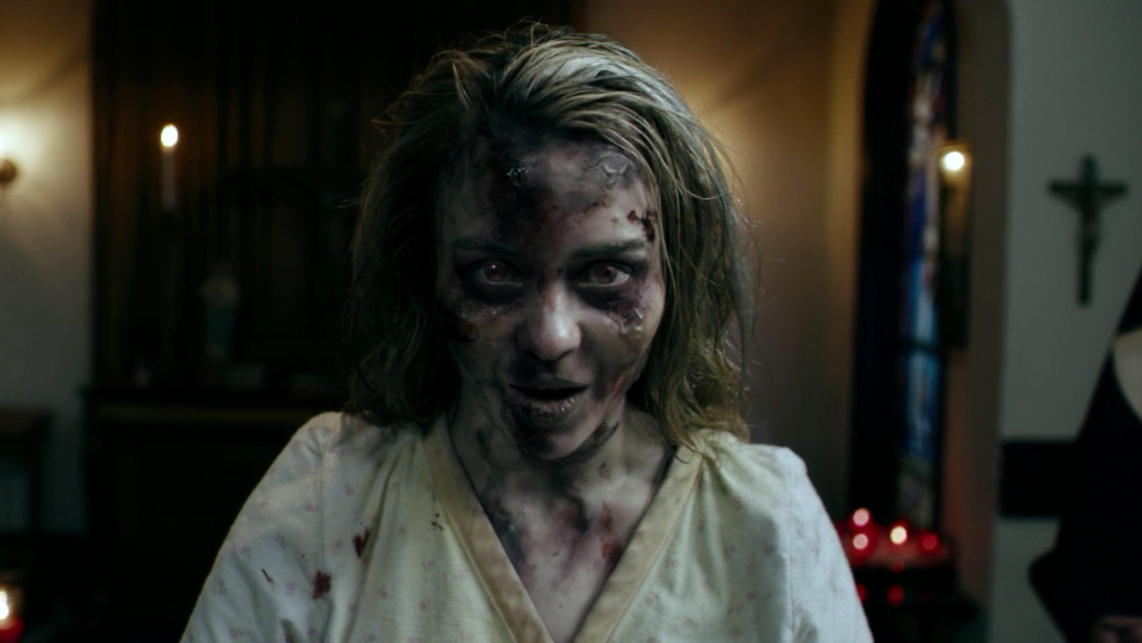 The Exorcist: The Series “Father of Lies” Episode Review 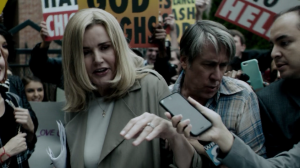 Episode Seven of Fox’s The Exorcist series, entitled “Father of Lies,” continues to bring the series into an interesting direction as several main characters are drawn into intense new physical and psychological conflicts. Based on the events of this episode, it’s clear that the season is headed for an explosive climax.

The age of the 24 hour media cycle is explored early on in the episode, as the Rance household is surrounded and harassed by fans, protesters and reporters. While Sharon Gless’ Chris MacNeil can take it because she’s seen it all before, these conditions are particularly stressful for Geena Davis’ Angela. Some of the particularly fascinating scenes of this episode portray an interesting dichotomy between Chris’ and Angela’s respective strengths and weaknesses. Angela’s newfound insight into what Chris must have felt during Angela’s own brush with the demon is the perfect example of the character-centric kind of show The Exorcist has become. Once the grieving mother, Chris now has to play a different role in what is happening to the Rance family, and her strength seems to keep the other family members just barely moving forward. 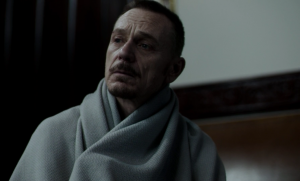 Casey (Hannah Kasulka) looks more terrifying than we’ve ever seen before. Her makeup is particularly darker and more profound than in previous episodes, and she goes from writhing in a serpentine fashion to wheezing in an almost comatose state as the episode progresses. Nothing is working and she is only getting worse, and the priests who are desperate to save her (even the nuns believe that a mercy killing is what’s best for Casey at this point) are going to dark places as a last resort. Alfonso Herrera’s Father Tomas is in the worst shape we’ve ever seen by the end of the episode, literally bruised and bloodied from a fistfight that he started with his own infected hands. The fact that he’s sinned in previous episodes only seems to make it easier for him to continue to sin. He lies to his congregation and his supervisor about Casey’s and Father Marcus’ (Ben Daniels) whereabouts and he continuously questions if God would approve of these lies because his intentions are just. Although Father Marcus is beginning to truly believe that God is acting through his hands, his despair as a result of Casey’s declining health makes him weaker than ever before. Fortunately for the viewers, the writers balance this sorrow with some clever and subtle comic relief. Father Marcus can still deliver some witty comebacks and Father Tomas’ outburst in the pharmacy has some tragically funny moments. 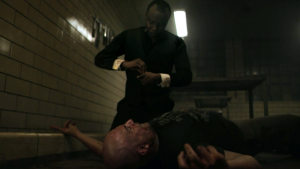 In this episode, Kurt Egyiawan’s Father Bennett has some of his best scenes in the series so far. Early on, he seemed to be little more than a tool of the establishment, but he does a lot of poking and prodding that puts him in two unique dangerous situations. He holds his own when questioning members of the secret cult about some irregularities surrounding the Pope’s upcoming visit, and he gets rather physical when fighting off two possessed thugs after uncovering more about the grand conspiracy the show keeps revealing. It’s clear that Father Bennett will continue to play a larger and larger role in the battle between good and evil going forward.

For a couple of episodes now, the show has hinted that the demon, Captain Howdy, is possessing Casey so he could get to Angela. After failing to fully integrate with her all those years ago, this grudge is personal and ugly. “Father of Lies” concludes with Angela coming face to face with Casey and the demon at her weakest point. It will be interesting to see how Angela’s emotionally compromised  frame of mind will affect her interactions with the demon in the next episode. The fact that Casey, under control of the demon, perks right up when Angela enters the room proves one thing: this is going to be a lot more fun for Captain Howdy than it will for Angela!

Overall, this is another fine episode for the series, and the rising stakes along with the effective storytelling are more than enough reasons to remain glued to the screen in anticipation of future installments.