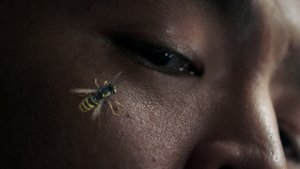 The kids of Andrew Kim’s (John Cho) foster home finally feel three dimensional because they’re given some lengthy scenes to be all in the same place to take a breather. The group goes on a camping trip as the result of a thinly-veiled effort on Kim’s part to alleviate the problem with Grace (Amélie Eve), which Kim believes is a stress-induced psychological manifestation. The viewers know that the problem goes much deeper than psychology when Grace begins stalking Father Tomas (Alfonso Herrera) around the abandoned Kim home. Grace’s supernatural presence is accompanied by stereotypical bumps in the night and swinging chandeliers, but the show really kicks it into high gear with more original scares like the final scene where Grace appears behind the damaged painting and turns into something altogether different. Bonus points should be awarded to the filmmakers for playing the scene without any startling musical cues… the imagery alone is enough for the scene to be altogether unsettling!

I found it interesting that Kim experiences hallucinations of hole-like wounds which spew insects considering the fact that the same gross-out gag is featured heavily in the current season of American Horror Story. Both shows were in production roughly around the same time, so the technique must just be an unusual coincidence. Perhaps wounds and sores of this kind are slowly becoming a part of horror’s new collective consciousness. 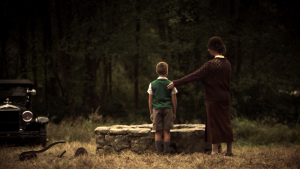 In this episode, Father Marcus (Ben Daniels) conducts an interview which opens up more of the story surrounding the mysterious island. It turns out that we’re looking at a legacy of fathers entering a possessed-like trance and murdering their kids. Not only is this development interesting because of its obvious debt to The Shining, but it’s also new territory for The Exorcist, a franchise which has had a longtime focus on matriarchal figures. Season One centered around Chris MacNeil (Sharon Gless) and Angela Rance (Geena Davis), and even the start of Season Two featured a disturbed mother who had been poisoning her daughter to mimic the effects of possession. It will be interesting to see how the season progresses now that we have a clear idea that Kim’s character is headed on the path of the corruptible father.

Speaking of Geena Davis, Father Bennet’s (Kurt Egyiawan) and Mouse’s (Zuleikha Robinson) snail’s-pace storyline might finally be headed somewhere interesting! By the end of the episode they discuss heading to Chicago to check in on some of the freakish occurrences of last season. Does this mean we may finally see fan-favorites, Angela, Casey (Hannah Kasulka), and Kat (Brianne Howey)? I most certainly hope so! 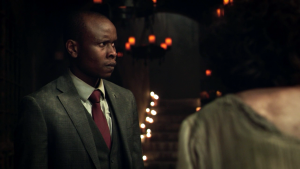 All in all, my suspicions about the series have rung true. I was not impressed by the major action sequences which opened the season, and I kept saying in my early reviews that the show might find its salvation when it gets all of the characters in the same place at the same time. We have finally arrived at that moment, and the show is definitely working better than it did when it began. While Marcus and Tomas spend most of the episode apart from each other, it’s clear that the series is moving in a direction where everyone will all be under the same roof soon enough to address the problems of the foster home and of the island itself. The stage has been set, so to speak. Part of me feels like this could have been done much sooner into the season, but better late than never!

One’s thing’s for sure: The Exorcist has made its way back to the top of my list for most-anticipated new television show of the week! This week’s developments hint at a variety of excellent possibilities for the rest of the season, and I’m looking forward to tuning in next week to see which ones become a reality.

Stay tuned to Horror News Network for more coverage of The Exorcist as news breaks!

New 'E! True Hollywood Story' Delves into Stories Behind Cursed Film Sets and the Annabelle Doll
'The Simpsons' Annual 'Treehouse of Horror' Episode Includes Parodies of 'Stranger Things' and 'The ...
Fox Cancels 'The Passage' After Only One Season
Release Date for 'Twilight Zone' Reboot
Reboot of 'The Grudge' Pushed Back 'Til Next Year
Extended Trailer Arrives for 'The Passage'
John Evans

Staff Writer at Horror News Network
John has loved movie monsters for as far back as he can remember. He's since collected up as many comics, statues, and autographed material related to movies and music that he can get his hands on. He is particularly interested in the critical and analytical discussion of the best stories the horror genre has to offer. One of his largest works on the topic is a study on the portrayals of people with disabilities in horror films.
http://www.horrornewsnetwork.net/wp-content/uploads/2017/11/Screenshot-2017-11-05-at-12.46.18-PM-Edited.png 768 1366 John Evans http://www.horrornewsnetwork.net/wp-content/uploads/2016/05/HNN-logo.jpg John Evans2017-11-05 18:33:432017-11-05 18:33:43'The Exorcist' Season 2 Episode 5 Review
0 replies

Hannah Kasulka’s Casey Rance to Return in ‘The Exorcist’ Season...
Scroll to top