The Hollywood Reporter broke the news today that Deadpool villain Ed Skrein has landed the role of Major Ben Daimio in the Hellboy reboot. The highly anticipated reboot based on the Mike Mignola iconic comic series is being put out by Lionsgate and Millennium. Skrein is will be joining Milla Jovovich, Ian McShane and Stranger Things star David Harbour, who will portray the devilish do-gooder.

Hellboy first landed in theaters back in 2004 with Guillermo del Toro at the helm. After much success, a sequel, and endless rumors about another movie, horror fans, and more specifically horror comic fans are anxiously awaiting the reboot. This time around with Game of Thrones Neil Marshall in charge, along with the all-star cast, this return of Mignola’s beloved character to the screen seems promising. 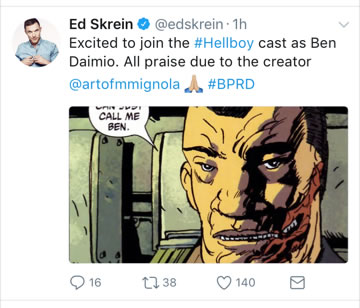 We will bring more news on the new Hellboy as we get here at Horror News Network.