Dynamite Entertainment and Topps are Bringing Back ‘Mars Attacks!’ in October

Dynamite CEO & Publisher Nick Barrucci stated that he has been anxiously awaiting the new series, saying that “I’ve been waiting to see Dynamite’s take on Mars Attacks! for over a year and I’m so excited with what the creative team has done.  I’ve been a fan ever since the 1962 trading cards and our series really reflects the tone of the original.”

Mars Attacks! was originally published by Topps Comics in 1994 and was written by Keith Giffen, with art by The Walking Dead’s Charlie Adlard.  Shortly after the comic was released, Tim Burton’s Mars Attacks! brought the property mainstream name recognition in 1996 (and that unforgettable “Ack, Ack!!” noise.)  When Topps Comics ceased publication in the late 90s after the direct market for comics imploded, the series would be picked up years later by IDW, and the company tried to mine gold by crossing over Mars Attacks! with many of their other licenses such as Judge Dredd, The Real Ghostbusters, and even Kiss.

The debut issue of Dynamite and Topps collaboration will be released this October with a number of  variant covers, featuring the talents of Tom Mandrake (The Spectre), Ruairí Coleman (KISS/Army of Darkness), Eoin Marron (James Bond: The Body), Robert Hack (Dr. Who),  Chris Schweizer (The Creeps), and a blank sketch cover.

Check out Ruairí Coleman’s cover below and stay tuned to Horror News Network for more information about the return of Mars Attacks! 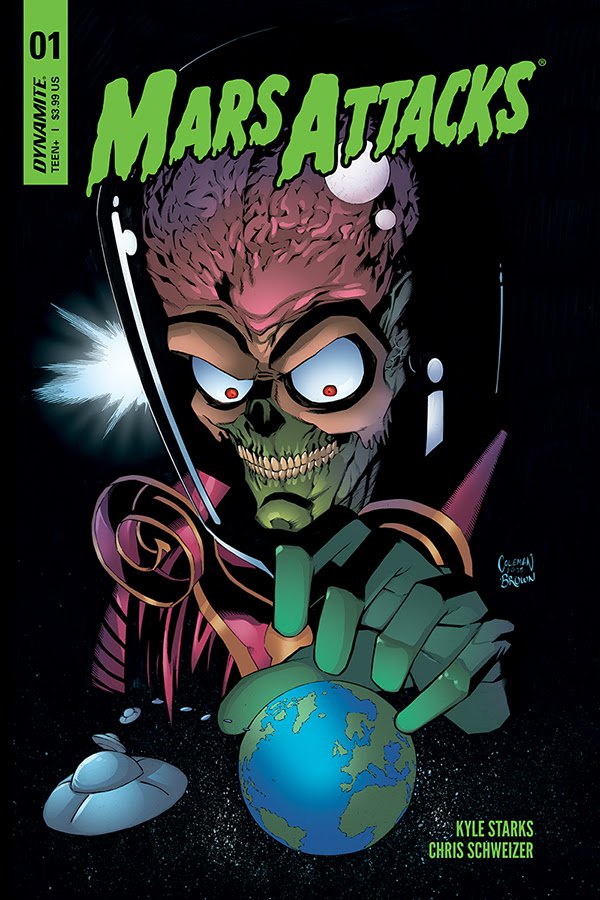 An author who will have his first collection of (very) short stories for youngsters--Afraid Of Everything--published this week has taken a page from the Bard's book. A...
Read more

Netflix has revealed the trailer for their upcoming series October Faction. The preview introduces us to a family of monster hunters adjusting to life...
Read more

Any fan of 70s horror comic staple Vampirella is familiar with the artist Buzz, the man who brought her back into the public consciousness...
Read more