Travel Channel’s latest foray into the world of the paranormal mixes urban exploring, challenges, and isolation experiments.  This edgy program entitled Destination Fear started out as hobby for siblings Dakota and Chelsea Laden and their best friend Tanner Wiseman, but has now transformed into a cross country road trip to some of the scariest locales around the United States.  All three members of the team took some time to speak to Horror News Network about the new program (which debuts on Travel Network on 10/26 at 10:00 p.m.) and how it differs from some of the current haunted fare that you may find on any other channel.

Horror News Network:  Where did the idea for Destination Fear originate from?

Dakota Laden:  It goes very deep.  My sister Chelsea and I grew up in a haunted house.  It wasn’t an extreme case, but it was definitely haunted and our parents were actually more concerned about it than the kids were.  Our parents ended up getting the house blessed, and activity stopped, but it sparked an interest in the paranormal and we formed a hobby around it as urban explorers of haunted locations.

We started a youtube channel and began exploring around Minnesota and then when we moved into locations in Iowa and Wisconsin.  So it started as road trips to these places.

Tanner Wiseman:  We were actually able to post over 300 videos on our youtube channel and developed a following which lead to Destination Fear.

D. Laden: Yes, and we don’t consider ourselves to be traditional investigators; we are more like paranormal explorers. Sometimes we use the standard gear, but the show is more about a blind road trip to a haunted location, full of twists and turns, where we sleep alone in isolation as an experiment in not only the paranormal, but also sleep deprivation, etc. Our approach is different because we don’t say anything is a ghost, we just want to document our experiences and share them viewers and let them decide.

HNN: You actually won the Ghost Adventures Mashup contest in 2011 as an 18 year old, right?

D. Laden: Yes, that was the start of it. I used to make parody videos of Ghost Adventures and I would always play Zak, which helped us get to where we are with Destination Fear.

HNN: Chelsea, what is it like working with your brother on the show, especially when it can get so tense?

Chelsea Laden:  I wouldn’t have done it with a group of strangers.  With Dakota and Tanner it is tough enough and you put yourself in an incredibly vulnerable situation.  It entails a lot of trust and there were times when I questioned him because a lot of these experiences take you to a different level, a different place and sometimes I interested clashed, but I was always with my brother and my best friend.

D. Laden: Just like with anyone who go on a trip together, especially when they are stuck in an RV for a month, there are going to be arguments and drama. When I composed some of the challenges for us, my motives may have seemed off at times and some of the places we visited were truly terrible places.

C. Laden: Because of the familiarity in the group, it made even the scariest situations better. We were in a comfortable setting because we were in our element, even when it got extreme.

Wiseman: When people watch the show, the bond that we have will be evident.  We’ve known each other so long that we finish each other sentences.  I think it would have been impossible to do this with random people.  We were friends long before the show and we confide in each other and ask each other “What are you comfortable with?” and “Can someone else do this challenge?” so we are honest about our feelings and fears.

D. Laden: We are all very aware when something is wrong. Chelsea and Tanner were friends before I was born and I’ve always looked up to him as a brother figure.  When we investigated the Sweet Springs Sanitarium, Chelsea had a terrifying experience in the basement, and to see the way that Tanner reacted and how he rushed to protect Chelsea, I just knew she was in good hands.

C. Laden: When you are going through something like that, it can make or break a friendship. It was clear that all of our bonds have been strengthened from all of the experiences on the journey.

HNN:  How did you plan the road trip and scout out the potential stops?

D. Laden: I have a huge map of the United States with pins stuck in it to represent different types of locations and they are separated into gold, red, and blue, with gold being the top spots. In order to be a gold location, the location must have a dark, creepy history, death, and a unique vibe. I have 50-60 gold pins on my map.

C. Laden: And it is crazy to see how many gold stars are still there that we haven’t been to yet!

HNN:  Was there a location that you visited this season that exceeded your expectations or one that surprised you?

D. Laden: Absolutely. The Fairfield County Infirmary (in Ohio) was one that we 100% underestimated.  It is easily one of the scariest locations we’ve ever been to.  It was a shock.

HNN: A big part of the show is the fact that you also isolate yourselves and spend the night apart from each other.  What is it like to sleep in these haunted spots alone?

C. Laden: Well, I didn’t sleep at all! It was tough to get ready for the nights alone and I had to pump myself up like I was getting ready to play a sport.  When you go in as a group and then separate and are hundreds of feet away in the dark, even out of radio range, that was a different type of fear.

Wiseman:  You get a false sense of security with the group and then when you spend 3-4 hours alone, it is a very different feeling.  When we were in these rooms, the darkness keeps getting darker, and even though we have walkie-talkies so we can call each other if we need to, the connections don’t always work, you can feel completely alone.

D. Laden: It’s not even the paranormal aspect, as the buildings themselves are dangerous and full of hazards. When you put your sleeping bag on the ground, there is debris and critters crawling around; it is an uncomfortable experience.

I don’t think I slept at all either.  I always tried to close my eyes, and I think the longest I went with my eyes closed was about 25 minutes, and when your eyes are closed, you are always worried what might be in your face when you open them.

C. Laden: When you are sleeping alone, all of your senses are heightened and being isolated, I think it is the reason we caught so many things on tape.

HNN:  Were there things that you saw at the locations that you weren’t able to catch on tape?

D. Laden: There were a handful of times when we saw things with our own eyes and that were hard to convey on camera, especially how scary they were.

C. Laden: You always need the camera running and there were times when the ovilus would go off and we wouldn’t see anything, but then later, we would catch something on camera.

Wiseman:  There were multiple times while editing that we didn’t see things that showed up on camera, and sometimes you wouldn’t know until months later. 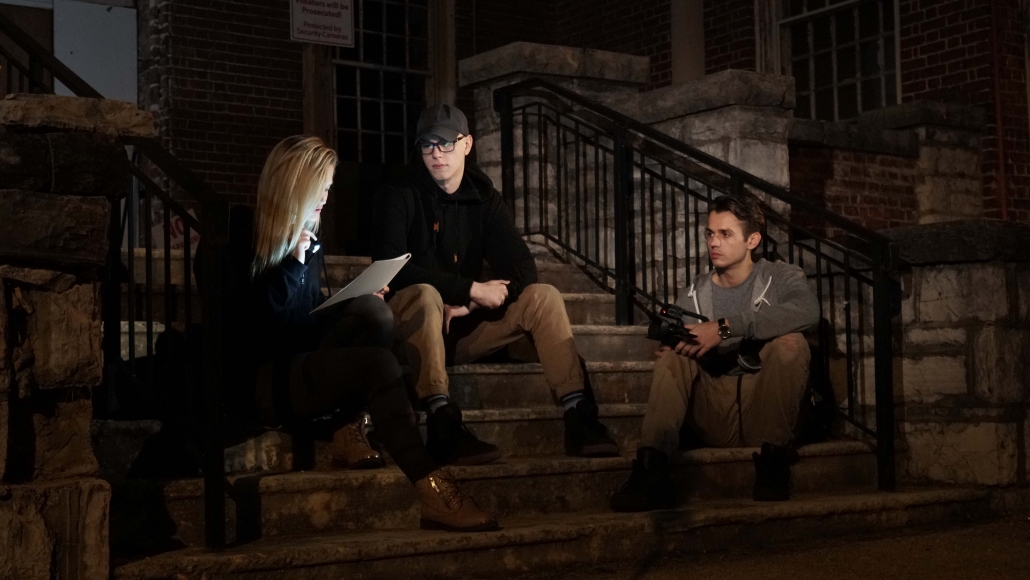 HNN:  So what can fans expect in this first season?

D. Laden: With a lot of ghost shows, it’s all about proving to skeptics that ghosts are real. We aren’t trying to convince anyone about the paranormal, we just want to reveal the experiences and footage and let the audience decide for themselves and also help us make sense of what we went through.

Wiseman:  We are excited to see the shows as well because we don’t know what happened to everyone else, we only know what we were experiencing.  You also get to go back and remember details that may have slipped your mind.

C. Laden: Right, we can’t see the footage right away while investigating, and you only have what other people said about their experiences, but now we get to see exactly what each of our nights were like.

D. Laden: It’s sort of like the movie Jaws, where the audience can see the shark, but the characters can’t. We are the ones who don’t know what’s going to happen.  People are going to be surprised.

Destination Fear season one debuts  on Travel Network on Saturday, October 26 at 10:00 p.m.

This year has had more than its share of scares, but 2021 will usher in a different kind of fright-fest--as the popular paranormal reality...
Read more

Travel Channel is set to tackle some of the most infamous horror cases with their new umbrella series titled Shock Docs. The series, which...
Read more

The Travel Channel is giving viewers a glimpse into its all-new four-part series--Ghost Adventures: Quarantine--with a tantalizing trailer. The miniseries--which follows four paranormal investigators who quarantined themselves...
Read more

Don Wildman has spent the majority of his career on television investigating some of history's greatest oddities through his long-running series Mysteries at the...
Read more