The 1963 classic Roger Corman & Francis Ford Coppola film Dementia 13 has been restored in HD by Film Detective and coming to Blu-ray July 26. You can view the full press release below. 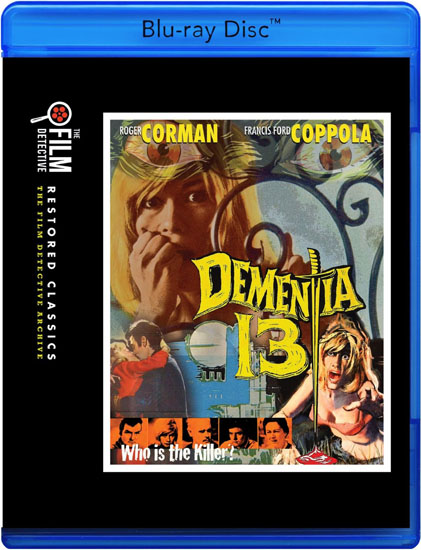 “A little gem of gothic horror …”

ROCKPORT, Mass. — July 1, 2016 — For Immediate Release — Produced by celebrated B-movie icon Roger Corman and directed by the legendary Francis Ford Coppola, the macabre thriller Dementia 13 has been digitally restored from 35mm archival film elements, bringing its terrifying suspense to the screen like never before. The 1963, B-movie classic will be available on Blu-ray July 26 from The Film Detective (distributed by Written and directed by Coppola (The Godfather trilogy, Apocalypse Now, The Conversation) at just 24-years- old, Dementia 13 is considered his first mainstream, “legitimate” directorial effort. Backed by funds leftover from one of Corman’s (Death Race, The Terror, The Little Shop of Horrors) other projects – on which Coppola worked as a sound technician – the fledgling director wrote the screenplay in one night, bringing Corman’s idea for a low-budget, extremely brutal, gothic-themed Psycho knockoff to life.

For years, it was rumored the film’s print had mysteriously disappeared. Now, the horror classic has received The Film Detective touch, delivering a crisp picture with quality sound. Commented film industry veteran Phil Hopkins, owner of The Film Detective, “As a huge enthusiast of Dementia 13, I’m very proud to be releasing the film on Blu-ray for the first time in its correct aspect ratio. The Film Detective team took great care improving the picture and sound quality and the restored 35mm HD transfer looks incredible. I hope fans old and new will appreciate it!”

Dementia 13 centers on the dysfunctional Haloran family, which has converged at the family castle in Ireland to enact a morbid ritual in remembrance of the deceased daughter of Lady Haloran (Ethne Dunn, The Mutations, No Resting Place). Secrets abound and soon there is a mysterious interloper prowling the grounds with a big axe to grind. Extremely engaging and well-photographed, Dementia 13 is a bone-chilling classic sure to thrill horror enthusiasts and Coppola fans alike.

Allied Vaughn is the recognized industry leader in on-demand manufacturing, sales, and distribution of film, music and games on DVD/CD. The company’s services connect content owners with a global network of consumers, retailers and emerging distribution channels. Allied Vaughn provides a forward leaning solution that includes asset sourcing, repurposing, manufacturing and fulfillment – along with sales channel development and management. Clients served by the company include 20 th Century Fox, Gaim Vivendi, HBO, MGM, MTV, Sony Pictures, The Film Detective, VCI Entertainment and Warner Bros, among others. Visit us online at www.alliedvaughn.com

About The Film Detective:

Founder Philip Elliott Hopkins – who has been a fixture in the entertainment industry since 1999 – has channeled his life-long passion for collecting classic films into The Film Detective, a leading purveyor of restoration and distribution of broadcast-quality, digitally-remastered programming, including feature films, television, foreign imports, documentaries, special interest and audio. Since launching in 2014, the Massachusetts-based company has distributed its extensive library of 3000+ hours on DVD, Blu-ray and through such leading digital and television broadcast platforms as Turner Classic Movies, American Movie Classics, NBC, Bounce TV, Hulu, Amazon, EPIX HD, MeTV, PBS and more. Visit us online at www.TheFilmDetective.com

The legendary, Oscar-winning actor, Martin Landau has passed away at the age of 89. His publicist, Dick Guttman, told the Associated Press that Landau...
Read more