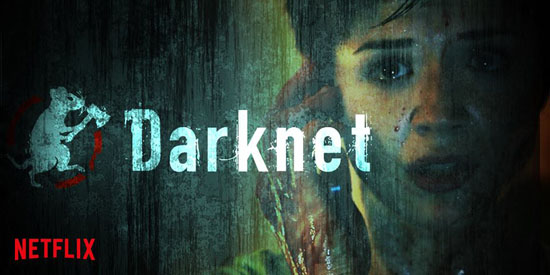 Synopsis: A macabre web site called Darknet links the tales in this chilling anthology series whose protagonists face a range of unnamable horrors.

Darknet is available on Super Channel in Canada and to stream on Netflix US, Canada, UK and Ireland.

Our Thoughts: Darknet is by far one of the best horror TV shows I have seen in a long time. I have been binge watching a few of the newer shows on Netflix, including Scream Season 1 and Slasher. Darknet was in the suggestions to me and I was curious. I didn’t know what to expect really. However, this series blew all the others out of the water. It’s based on an original Japanese series, which could be part of the reason why. That and it has a handful of great filmmakers involved including Vincenzo Natali, who is behind the cult classic Cube, and Steven Hoban, who did the recent Christmas Horror Story, which is a new favorite of mine. You can see the influence of films like Cube very clearly in the production. There is top of the line disturbing gore and all around strangeness.

The overall story is centered on a website that shows the darkest of what the web has to offer, including videos uploaded by serial killers and the like. There are a few characters the come back later, but for the most part each episode has 2 disturbing stories, that are tied to the other in some way the the Darknet website.

Unlike Masters of Horror, which I did love but is very hit and miss, Darknet is strikingly consistent, which each episode as good, if not better than the last. It also has pretty decent replay value. I’ve watched it over a few times now and you pick up more each time.  Michelle Alexander, who plays Alison, one of the few returning characters, is excellent. As is Carlyn Burchell who plays Katie.

Unfortunately, there are only six episodes currently. However, there has been a push for more to be produced by fans.  Last year the official Twitter for the series was suggesting fans Tweet to Netflix. If you watch it and love it, I suggest you do. I also hope posting this review of the series will give it some of the attention it deserves.  Anyone who is fan of any kind of anthology horror should check out Darknet.

Some people claim sleep is overrated, but don't tell that to the folks trapped in the nightmare at the heart of Awake, a new Netflix...

Fans of DC Comics' Sweet Tooth series by Jeff Lemire only have a few more weeks to wait for the live-action adaptation to hit Netflix. The streamer this...

Netflix in Talks with David Fincher for Season 3 of ‘Mindhunter’

According to small-screen.com Netflix is currently in talks with David Fincher for season three of Mindhunter. Fans of the show will remember how season...