Sad news as reported out of Hollywood. Robert Rodan, most recognizable to horror fans as the Frankenstein Monster on ABC’s daytime drama Dark Shadows, has passed away from heart failure in Oregon.  His death marks the third loss in recent weeks from the show’s cast, following both Geoffrey Scott and Christopher Pennock in February.  Rodan was 83.

Despite a brief acting career, Rodan left a unique mark among viewers during his run on Dark Shadows in 1968.  Following several un-credited film roles, the tall, handsome actor (despite the massive facial stitching that comprised his signature look) acted in just one more film (1969’s The Minx), before pursuing a career in real estate in Southern California.  Rodan did make several low-key returns to the Dark Shadows universe, including a behind-the-scenes video and documentary in the 1990’s.  Rodan also participated in the early 2000s in a series of audio dramas based on Dark Shadows, his last foray with that franchise.

Rodan’s death was first announced by the Dark Shadows newsletter Shadowgram, and later confirmed by the Twitter account Dark Shadows News (see below.)

We at HNN send our condolences to all of Robert Rodan’s family and fans. 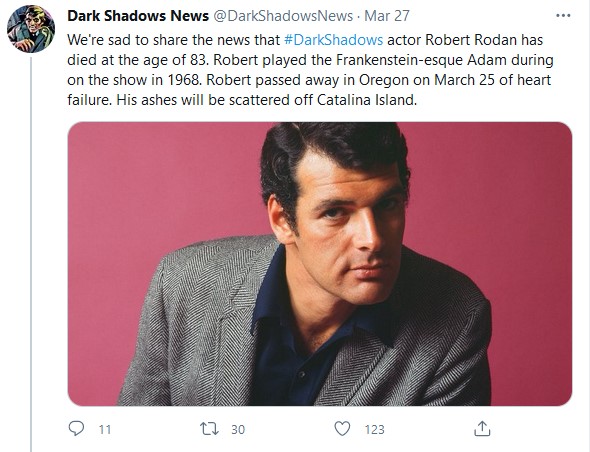 Sometimes the dead stay dead--the Collins clan will not make another small-screen appearance with Dark Shadows on The CW after all. Horror News Network reported last year that...

With confirmation from Deadline, legendary horror television series Dark Shadows will be getting a continuation on The CW network. The station, along with Warner Bros....