Danny Trejo Joins the Cast of Zombie’s ‘3 From Hell’ 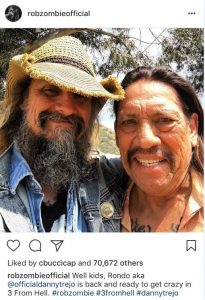 Hell, currently shooting principal photography, will once again follow the infamous (and apparently bullet-dodging) Firefly Family as they terrorize and victimize innocent and unfortunate citizens.  These folks, Otis, Baby and Captain Spaulding, were last seen crumpled over in a bloody heap through the windshield of a still-moving convertible under a hail of sheriffs’ bullets but appear to have survived.  Since no other details have yet been provided by either Zombie or distributor Lionsgate, we’ve been left to assume that the three killers (Sheri Moon Zombie, Bill Moseley and Sid Haig will once again star) return from the dead to seek revenge.  Trejo’s addition would then make sense, as Rondo was one of the hired guns that tracked down the trio for vigilante Sheriff Wydell in an act of retribution.  Could DDP be far behind, as his character Billy Ray Snapper was Rondo’s partner.  One can only hope…

Trejo joins a strong ensemble cast which has already been announced for 3 From Hell, including Dee Wallace, Tom Papa, Clint Howard and Dot-Marie Jones among others.  Zombie has always been good in hiring genre-darling actors and actresses for his films, and casting them in multiple movies.  For Trejo, this will be his third collaboration with Zombie (The Devil’s Rejects and 2007’s Halloween reboot being the others.)

Could 3 From Hell be the supernatural film that Rejects wasn’t?  No plot points or release schedule have yet been made public, but that hasn’t stopped the speculation about the film’s premise from running wild online.  House of 1000 Corpses, Zombie’s directorial debut and the first appearance of the Firefly Family, revolved around a supernatural killer that was thought to be myth named Dr. Satan.  That element was missing from the sequel, as the story had a more realistic (but still blood-splattered) theme.

With casting news being unveiled at a break-neck pace, expect more details from the 3 From Hell set to emerge in the near future.  Danny Trejo’s addition is a welcome announcement, but let’s hope Rondo’s arc is more Machete than Tortuga.

Keep tuned to HNN for more news on 3 From Hell as it breaks!

Lionsgate continues its strong presence in the horror arena with the upcoming release of the psychological thriller Fear of Rain. The genre film--slated for a Feb. 12, 2021...