Like any successful comic book anthology (especially one that is 20 pages short of DC’s successful relaunch of the 100 Page Giant Super Spectacular editions), the Cursed Comics Cavalcade collection casts a wide enough net to satisfy fans and collectors of all ages, from classic DC silver age fans to those who regard the New 52 as a bygone era.

Unsurprisingly, the stars of this collection are DC’s most famous monster character (and soon to be TV star) Swamp Thing, and the darkest and most angsty hero in the known universe, Batman.  The collection begins with a Creepy-style nightmare from writer Tim Seeley and a man well known for horror comic illustration, Kyle Hotz.  Seeley’s script certainly captures the prose of many of the early Warren magazines, and it almost reads like one of those early Poe adaptations that entertained so many monster kids of the 1970s.  We are quickly brought into a scientist’s nightmare world (which is surprisingly bright and dayglow despite the horrific images and creatures that she has to deal with) and luckily, there is a different type of “doctor in the house” by the name of Alec Holland.  Hotz’s depiction of the earth elemental varies and even takes on a Wrightson-esque appearance in the lab (grayer, with his prominent brow and sad eyes on display) as opposed to the “greener” version in Dr. Wagner’s nightmare.  The story wraps up rather quickly, which is less a criticism of the story, and more a function of the format, but nonetheless, the resolution does come rather quickly.

Batman’s tale comes courtesy of noted screen writer Gary Dauberman (It, Annabelle: Creation, The Nun, and the upcoming Swamp Thing streaming series) who wears his horror influences on his sleeve in this race through a number of horror tropes and motifs.  Dauberman’s writing is intentionally spartan, allowing artist Riccardo Federici to shoulder the story-telling chores, and he is more than up to the task.  Federici’s style is perfect for a horror comic book, with his photo-realistic artwork and muted tones, switching from sepia to black and white to arterial red.  Batman comes in later in the short story, but the sumptuous, yet disturbing art is enough to make readers forget that it is even a Batman story.  Sure enough, he does show up to deal out some of his grim justice, but the tale of an obsessed horror fan stands on its own. 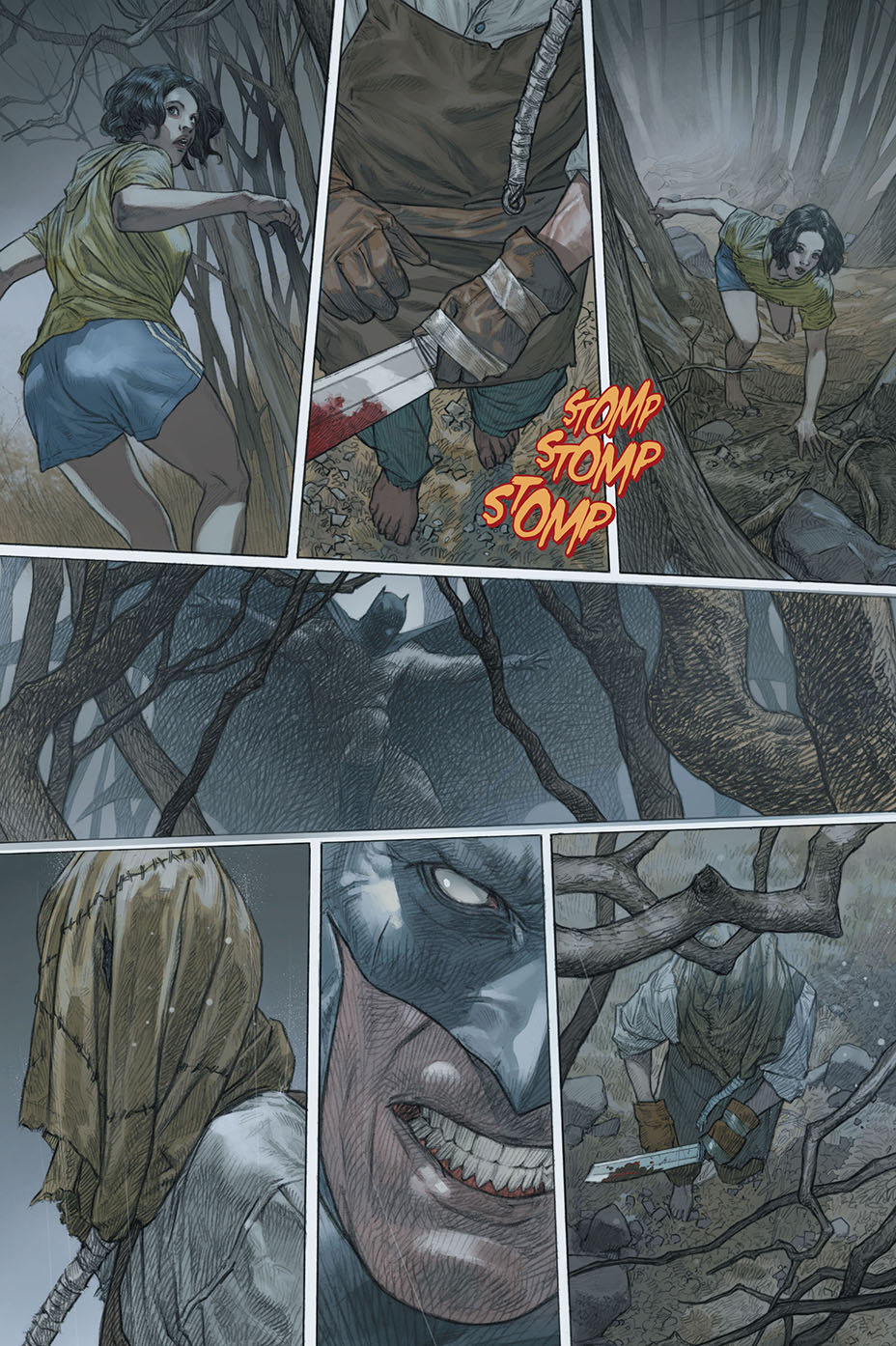 After the Swamp Thing and Batman stories, the rest of the collection varies between standard super hero stories shoe-horned with horror elements or entries that may be better suited elsewhere (such as the one starring Black Lightning and Katana).  There are two surprises however, featuring heroes that we don’t often associate with horror elements: Wonder Woman and the surliest Green Lantern, Guy Gardner.

The Wonder Woman entry entitled “Siren Song” by Vita Ayala and Victor Ibanez give a classic Greek mythological monster a modern make-over, transforming the deceptive creature into a obsessive, terrifying, and formidable opponent.  It is difficult to put Wonder Woman into a situation where we fear for her safety, especially from a villain that seems out of her league.  In spite of this hurdle, Ayala weaves the story together by incorporating advice from Diana’s past with fairy tale elements and actually makes you scared for the villagers who are losing their loved ones, as well as the Amazonian princess herself.  Ibanez illustrates the story with less focus on Wonder Woman’s physical prowess and more on the harrowing situation of the small fishing town, and his art is at its best when he captures the essence of the siren, which is pure distilled horror (probably the scariest image in the entire anthology).

The biggest surprise in the collection comes in the form of Kenny Porter and Riley Rossmo’s intergalactic zombie story starring Guy Gardner.  Borrowing elements from Alien and any zombie movie ever made, Porter places the headstrong Lantern in harm’s way, even though the threat has a greater psychological, rather than physical, impact on him.  You never fear for Gardner’s safety, but the story does highlight the best aspects of the anti-hero and gives him something to think about concerning his own troubled legacy by the end of the story.

Rossmo’s art goes a long way in capturing the feeling of zero gravity, as Gardner flies through the alien and mechanical debris of space, with the ever popular slanted panels on top of a larger splash page.  Not only does it share Gardner’s perspective, but the smaller panels also showcase his tell-tale facial expressions, some of the best since Kevin Maguire’s take on the character.  Hopefully, Rossmo (and Porter for that matter) have the chance to tell more stories featuring the recalcitrant member of the GL Corps.

Maniacal clown kills a kid with a crowbar. Or, as comic fans know it: Batman A Death in the Family. In 1988 DC Comics...
Read more

In this dog-eat-dog world of 2020, the animation arm of Paramount Pictures is planning to bring to vibrant life an upcoming horror title from...
Read more