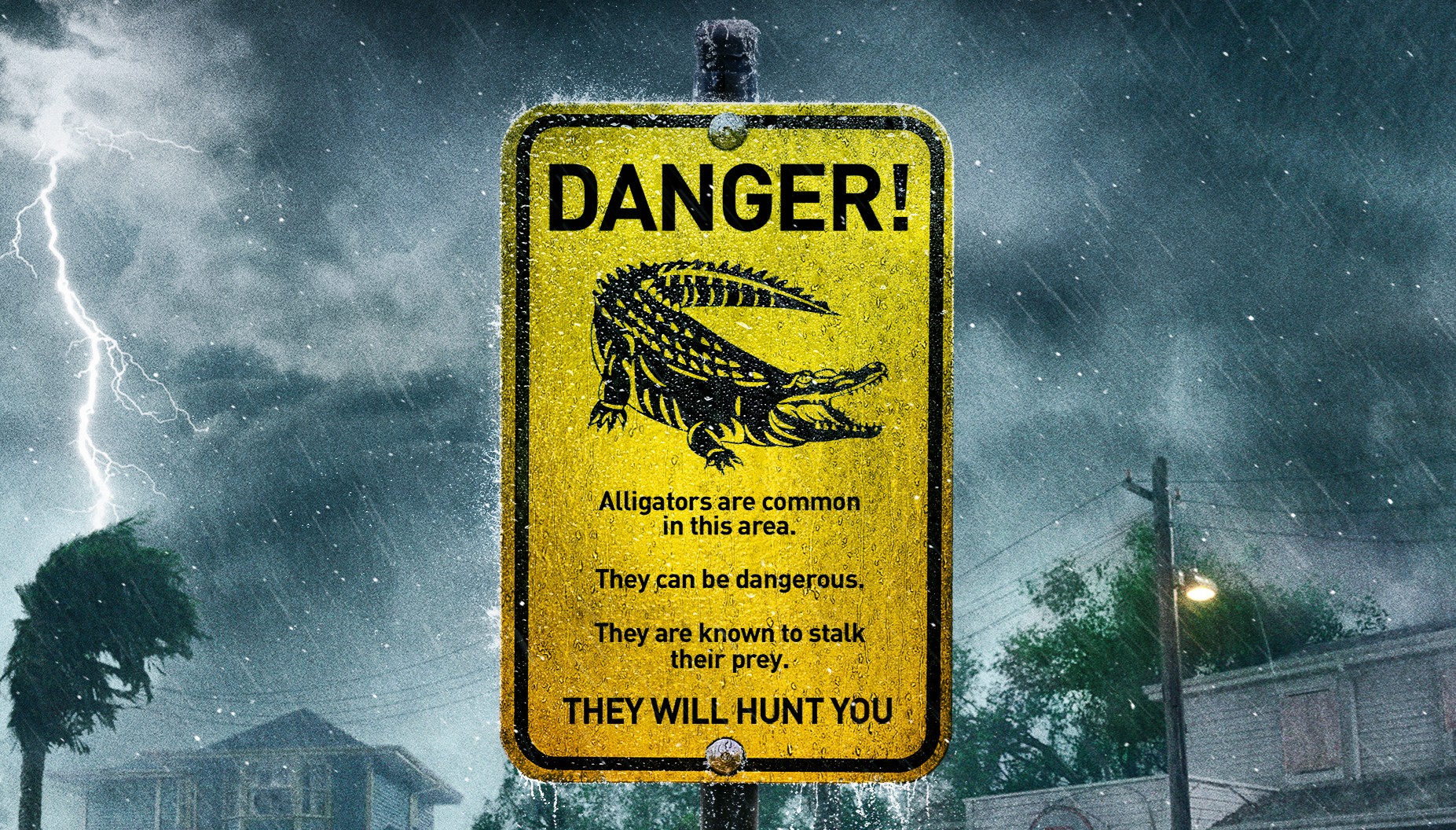 Crawl is a very strong entry in the storied category of aquatic monster movies. Ever since Bruce the shark first popped out of the ocean in Jaws, filmmakers have always been trying to recapture that distinct sense of dread that comes with the mystery of what lies beneath the surface of the water. Aja has found the perfect monster to rekindle interest in this fascinating sub-genre. The alligator shares many of the same predatory qualities as great white sharks, but with one major caveat: they can wreak a lot of havoc on land as well! Crawl‘s pacing is perfectly aligned with the rising of the water throughout a Florida hurricane, and the viewer can’t help but feel a lurking sense of dread along with each progressing establishing shot where the sea level is just a little bit higher. There are few films out there which capture the terror of an aquatic predator like Crawl does. 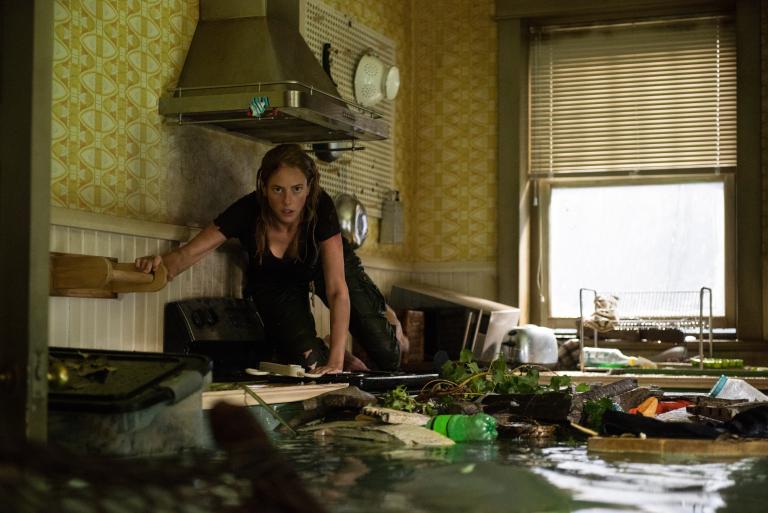 Even better, Crawl isn’t just a movie full of thrilling water monster scenes; it’s also highly character-driven in how it tells its story. Kaya Scodelario and Barry Pepper make up the main cast, and it’s up to their performances to carry the entire movie. At least one of them is on screen in almost every scene, and both performers effortlessly sell a complex father/daughter relationship while portraying what it must feel like to be a regular person trapped in such a deadly predicament. Scodelario’s Haley is only in the middle of this evacuation zone because she’s trying to find and rescue her missing dad, and Pepper’s Dave didn’t leave hours ago because he was incapacitated by a gator in the old family home’s crawlspace. These characters aren’t thrill seekers or too ignorant to understand the importance of evacuating when a serious Florida hurricane looms near, and that makes them more relatable to viewers. When the alligators burst onto the scene, chomping away violently and flipping their massive prehistoric tails, we find ourselves rooting for the characters more than we would for the average horror archetypes of modern cinema.

Fortunately for this horror film, though, there are enough secondary characters thrown in the mix that the audience doesn’t care as much about them being on the receiving end of an alligator attack! Crawl follows some of the classic horror tropes to a T, resulting in some gory delights. There wouldn’t be a hurricane without looters; and it wouldn’t be a proper horror movie if they weren’t punished for their misdeeds! Aja films these scenes both from above and below the surface of the water, resulting in some seriously action-packed attacks. The gators are very well done, and their movements look natural and believable throughout the film. This isn’t the only style that Aja uses to convey terror throughout the movie either. There are incredibly claustrophobic scenes in Crawl– some of the best committed to film since 2005’s The Descent– where the characters are stuck navigating the uncomfortably tight corridors of a Florida crawlspace. This deadly combination of moments and scenes builds to a highly satisfying horror experience. 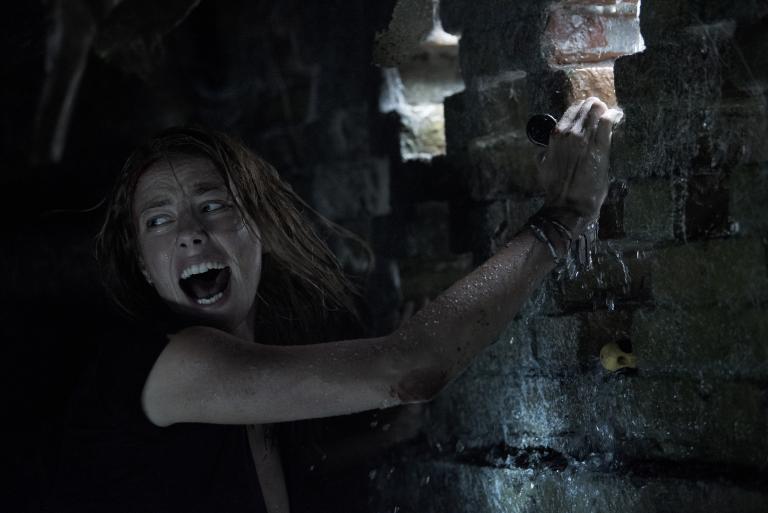 Paramount Pictures provides a delightful series of special features on the Blu-Ray disc which help flesh out the viewer’s understanding of the film and how it was made. In one bit, Alexandre Aja introduces an animated storyboard sequence of a bloody opening scene that was ultimately never filmed. The sequence certainly establishes the carnage which comes later in the picture, but the overall pacing of the final cut of the film proves that it was probably for the best that the terror slowly builds up as the water level rises. There is also a 28 minute making-of featurette on the disc and nearly 6 minutes of deleted and extended scenes. “Beneath Crawl” shines a light on some of the unique production considerations related to shooting a movie that takes place almost entirely in or underneath water, and it reveals the bond that the filmmakers and performers forged throughout the making of the film. “Category 5 Gators: The VFX of Crawl” is an 11 1/2-minute look at how the visual effects artists brought these deadly creatures to life through a blend of practical effects and computer wizardry. It’s an interesting study of how to use special effects believably. All of these special features contribute to a fantastic overall package.

The Blu-Ray release of Crawl perfectly captures the visual quality of this gritty film. Every dirty, muddy, rainy detail shines in the transfer, and the film’s dark scenes evoke an aura of mystery without falling victim to being so dark that the viewer can’t tell what’s happening. The movie simply looks great on this disc, making it the ultimate package for fans of the movie and collectors of the films of Alexandre Aja’s lengthy career.

Alexandra Aja's survival thriller 02 has begun production in France. The High Tension, Piranha 3D, and Crawl director will be shooting the film for Netflix. Screen Daily reports that...

While the horror community has been feeling the ever-increasing effects of the COVID-19 (otherwise known as the coronavirus) global pandemic with numerous conventions either...