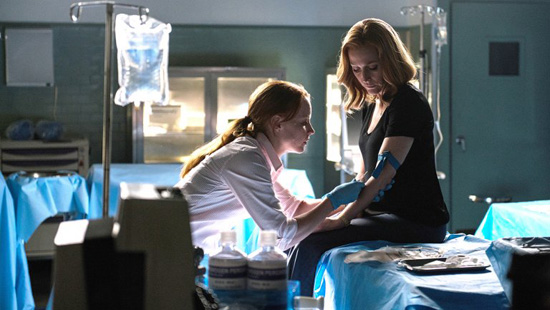 In an interview with THR, Chris Carter revealed that Fox is going to want more episodes of ‘The X-Files’ in the future in light of the high ratings for the show.   They have not negotiated anything yet and the process could take sometime, however it will happen. It is just a matter of when.

You can read the full interview below.

Are we going to see more of The X-Files on Fox?

They’re going to ask for more. The ratings were very good. They were happy with the show. I talked to Dana Walden today. She said they’d very much like more, but nothing’s being negotiated yet.

Did you talk about timing at all?

It was casual. She said, “No pressure. We’d love to do this. We liked the way it worked out.” So there’s an appetite for more in the future, it’s just a matter of figuring out how to get it done. The last negotiations took about five months, so it could be a while before we figure out how to do this.

There was speculation with the addition of Lauren Ambrose and Robbie Amell that there might be some kind of spinoff. Have you talked about that at all?

No, we haven’t. I really love those guys. They’re terrific actors, and excellent to work with. It would be nice to include them. But, at the same time, we didn’t make series deals with them. I can’t imagine they’re not going to be scooped up and be somewhat unavailable to us. It will just be practical about how we’re able to work with them in the future.

That was the issue with getting David and Gillian for these six episodes. Have you talked to them recently about doing it again?

I have been speaking with David pretty regularly. I think he’s game. I have spoken to Gillian less frequently, but I believe she would be game. So I’m just working around their busy schedules. They both have families. It’s another practical matter.

Having launched these six episodes, how do you feel about continuing the feature side of the franchise on top of the series?

They’re two different animals. And the second movie, we tried to do something more akin to the television show. I think if we had to do another movie, it would have to be another tentpole movie — more in keeping with what we did with the first. I think there are a lot more X-Files to tell, certainly given this cliffhanger, so I think it opens up both the TV and movie parts of the franchise.

It is quite a cliffhanger.

You know, I honestly did not have episode six completely worked out [when we started]. There are two other people credited with the story, Dr. Anne Simon and Dr. Margaret Fearon, and I had been talking to them about the science of the show. Anne has been the science adviser since the beginning, really, and I’d let her read the first episode. She kept talking to me about this cutting edge genomic science and how it might be used. I was directing episode four, which aired as episode five, and I still didn’t know how the series would end. I came up with it in the middle of that episode. In terms of prepping for the finale, I was very late.

What did the network think of the cliffhanger?

The X-Files traditionally ended with a cliffhanger, and we didn’t want to do anything different. This just happens to be a very big cliffhanger. I have an idea of where the story goes.

The finale also sets up a landscape where aliens and the big conspiracy aren’t that secret. Is that where you want to take it?

It begs that question. I’ve thought about it.

You obviously aren’t jumping back into production tomorrow. What’s next for you?

Right now I’ve got another project that I want to do first. So, for me, it’s just a matter of trying to do [The X-Files] when it makes sense and not try to shoehorn something or hit a schedule. This was hard enough doing what it did. We had a very hard beginning and end date. To meet those dates, it was difficult. We were running for our lives to get them done. You’d prefer not to work like that.

What’s the other project?

My wife, who is a best-selling novelist, wrote a book of short stories about nine years ago [Dori Carter’s We Are Rich]. She’s adapted them. And I really want to see if we can bring that adaptation to the screen.