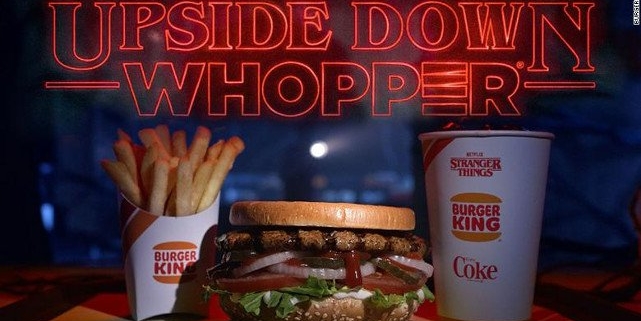 The limited-edition burger will hit the following cities on June 21: Miami, Houston, Boston, Atlanta, Philadelphia, Dallas, Chicago, San Francisco, Los Angeles, and New York.  There will only be eleven locations in total (get it?) featuring the burger (which in any reality is just a traditional Whopper served upside down, so just in case you can’t get to one of these locations, you can replicate the Hawkins National Laboratory experiment on your own with a simple flip).

Earlier this month, Baskin-Robbins introduced a number of ice cream creations inspired by Stranger Things and Coke was the first out of the gate with a limited relaunch of their monumental New Coke disaster (available only on a retro website inspired by the 8 bit video game graphics of the same era).

Staff Writer at Horror News Network
Nick joined the website in 2015. His lifelong love of comics and horror began with Universal Monsters and the Incredible Hulk. He has fond memories of going to Waldbaum’s supermarket with his mother and being rewarded with a 3-pack of sealed comics. It’s been all downhill from there… Since those early days, his life has been immersed in four color action and scares on the silver screen.
http://www.horrornewsnetwork.net/wp-content/uploads/2019/06/Stranger-Things-Upside-Down-Whopper.jpg 360 641 Nick Banks http://www.horrornewsnetwork.net/wp-content/uploads/2016/05/HNN-logo.jpg Nick Banks2019-06-15 20:39:522019-06-15 20:39:52Burger King Unveils 'Stranger Things' Upside Down Burger
0 replies