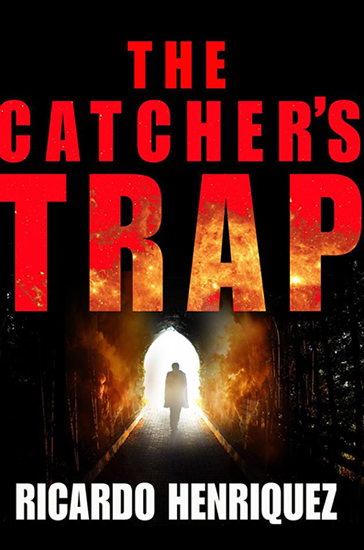 To write is to open the world to the minds, hearts and souls no matter how dark or fearful they maybe. This line was inspired by the very personal as well as very macabre writings found in what I hope is many books to come of Ricardo Henriquez and his novel The Catcher’s Trap available to purchase through Amazon, Barnes & Noble and more right now. Set in the present, a young, Latino man named Andres has failed to live up to the expectations of everyone around him. His life is overwhelmed by a wave of all consuming depression as well as confusion on his sexuality that has caused him to lose his way and focus on life. Hanging one night with a group led by an alpha male in Roman, Andres is taken to a club as Roman’s guest to loosen up and have fun perhaps a bit of trouble… As the night goes on, he is nearly thrown out of the club by a large bouncer type that is stopped by Roman. As Roman attempts to escape with his entourage and Andres, Roman betrays Andres capturing him for slave labor in the world that bends the line of horror, sci-fi and fantasy called “The Mist.” This realm shows no bias or mercy as countless souls are enslaved to work the fields cultivating a mysterious white powder. Ruled by ruthless establishment, Andres and his fellow slaves including a caring and hardened woman known as Claudia. A protective and distant friend Steve as well as more must fight and survive each day from the guards, the labor and themselves. As the days goes on and that status quo seems hopeless among the slaves and their masters, Andres is woken up from the possession of depression and lack of confidence to see a larger purpose in his life and those around him. Being offered a chance to lead a revolution by a figure named Balthazar, Andres must decide inside what is worth fighting for and what is worth giving up? Is he a hero? Is he a traitor? Is he just a young man who faces confusion, doubt and pain for the choices and actions he makes and the ones he lets stand by? Is it destiny or fate? Built on a foundation of dark personal experience, detailed storytelling and respect for the reader, The Catcher’s Trap bends the status quo for horror/fantasy taking the reader down a dark path where the only way to survive is to stand for what keeps you strong inside and never give up no matter how hard it becomes. 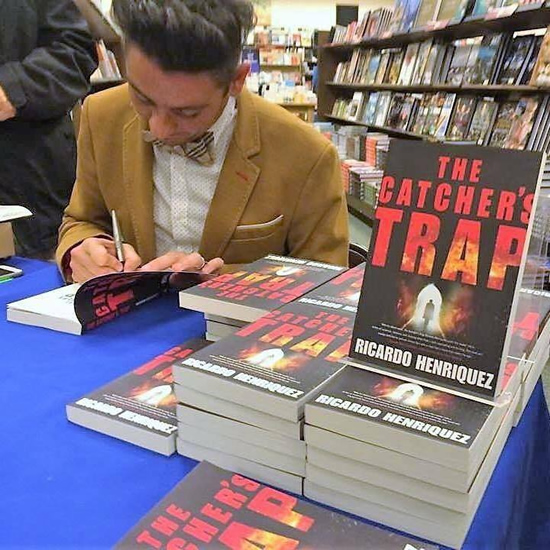 “I wanted to write a book I would like. I wanted more than anything to have my feelings turn into physical structure and things. I like to be scared myself and I like other people to feel that frightened.” – Author Ricardo Henriquez

The Catcher’s Trap is a powerful debut novel. Full of fear, angst, and self-discovery, this coming of age story finds a voice needing to be realized within the pages of this horror and fantasy story. Refusing to call it an epic by author Ricardo Henriquez, this story about one young man’s journey through the inferno as well as battling the person he may or may not become, we see the birth of what may be a great journey ahead. With the curvy and at time misdirected path for the reader to follow, we ask ourselves what must Andres’s do and who he will become?

To answer that, Henriquez went very deep inside himself in the planning of The Catcher’s Trap on each level. Dealing with very dark times in his life, Henriquez channeled the struggle against depression into each of the well-crafted characters. Whether hero, villain or somewhere in the middle, we see that each character just like the setting holds pieces and influence from the author. Why the book could use some development on the overall description of the locations within the land known as “The Mist”. I feel that Henriquez made the right call making this first book less about the battlefield and more about the participants. It is like he only opens the curtain some to reveal what not only peaks the readers interest but treats the reader with respect instead of handing them the entire visual.

The world of “The Mist” is a symbolic purgatory that addresses a variety of issues and topics with the narrative and journey. Different character perspectives on racism, rebellion, slavery, fear, self-confidence, bullying, sexuality, religion, abuse, addiction and more are raised like pillars on a foundation of coming of age and story development. The author is not in haste to make this a palpate which a lot of books I have read seem to do. These sorts of issues and topics can take away from the story overall weighing down with going off track and the failed execution by the author, Henriquez for the most part never lets these sink him. No matter the issue or topic listed above, we see it blended into the characters of this story seeing rises and falls that don’t make you lose your balance.

Henriquez, who has talked about some of these experiences in his life like the tyranny of his homeland of Chile, sexual confusion, rebellion and his dark battle with depression recently on The Horror Happens Radio Show, described his struggle as well as the lead character Andres who also struggles. Henriquez described the depression as having a like a hole in the middle of his chest sucking everything out of reality and turning it dark. A powerful visual to say the least as we see these struggles balanced with an influx support from his fellow field workers, the memories of the life he was wasting outside of “The Mist” and his heritage as well as family that helps to light the spirit inside.

The Catcher’s Trap does move cautiously as we see the constant struggle of Andres and the growing relationships between a population of very diverse individuals trapped in the nightmare same as Andres. Henriquez is smart not to have many throw away characters unless it is called for in the flow and action n of the story. Perhaps a tighter edit could have trimmed down an inner discussion, conversation or bout of self-doubt to make the book a bit smoother but for a debut novel and one that could have been ruled by Henriquez’s struggles in his past, Henriquez shows us that his demon does not control him and the path has taken him into a light that the reader will be paid off with in the end I have no doubt.

For straight horror readers, besides the horror of life and the soul of many, The Catcher’s Trap offers a bloody blend of torture. Unsettling at times dehumanization of the workers. A variety of abuse and seedy manipulation by a love to hate set of villains as well as the growth of tension, monsters and unrelenting violence. Henriquez is a horror fan which is a badge he wears proudly and is plotted out wonderfully with each beat and blend of the issues, themes and topics. For me, it is a battle in the first book of a supernatural horror story vs a human horror story. Why the environments may need a bit more of detail, Henriquez does find a very experimental and powerful understanding of sensory detail especially on the fields that Andres and perhaps his people work. Henriquez wanted the reader to taste the detail and use more than their visual sense. Think American McGee crafting the land of Oz… For example, the white dust creates such dread and is frightening in its effects, returning the poor victims to areas in their mind they rather not face again. It’s interesting how the story hints at addiction and being lost to the powder but never pushes anyone into the realm. It does however offer a sexual pulse that Henriquez wants the reader to understand the confusion and attraction of certain key characters.

The Catcher’s Trap is that therapy book in which Henriquez needed to write in the process of exorcising his demons. Whether they are gone, I am not sure. However, I know that one man’s nightmare has turned into a beginning of a wonderful story and world of destiny versus fate. It’s becoming a leader and reinstalling the confidence lost after being broken down and a path of strength for not just one character in Andres, but many who must decide what is worth fighting for when they don’t have the gift Andres does. This book has a weaving line of reality that will dig into each reader and move through their soul as the versatility, emotion and overall balance of the story gives something to everyone. This is a hybrid of a book for sure. Don’t discount it for the brutal, graphic and uneasy feel the horror creates and reeks, instead settle into the fact that what Henriquez crafts is real and the drama, love or hell makes for a strong book and worthwhile experience for the reader.

Family is forever through the good, bad, rough and easy. It is an institution that causes drama, creates happiness, brings out the worse in...