The House by the Cemetery continues Blue Underground’s tradition of offering virtually flawless transfers of catalog horror films in stunning 4K UHD format. If you are a fan of this Lucio Fulci murder house movie, there is simply no better version of the film available on home video.

While The House by the Cemetery arguably isn’t exactly as memorable, engaging, or coherent as Fulci’s other masterpieces (like Zombie, for example), this film offers more evidence that Fulci is the “godfather of gore,” and it expands his directorial trademarks into the realm of the old dark house. The mystery of Dr. Freudstein’s monstrous experiments unfold over the course of 86 minutes of special effects and a traditional Italian-style score, courtesy of Walter Rizzati. You probably know whether you’re a fan of Fulci and The House by the Cemetery already, and this release isn’t going to change that. What this package does do, however, is offer an impeccable release of this classic title. 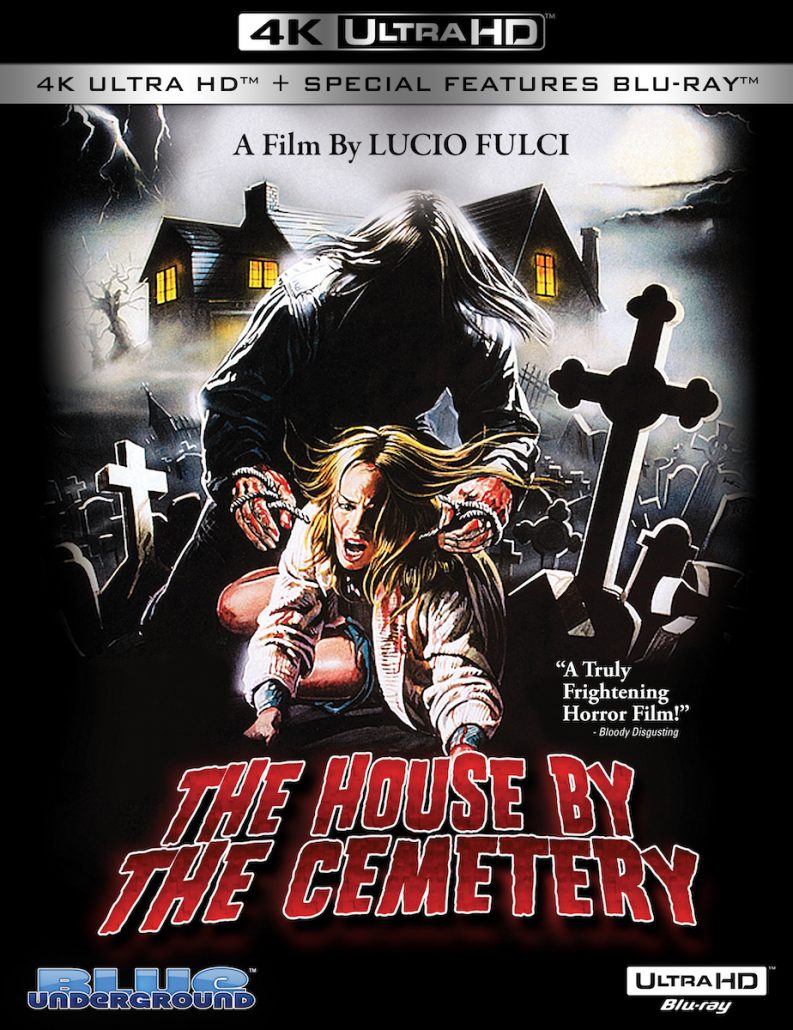 Blue Underground pulled out all of the stops with their 4K UHD transfer of The House by the Cemetery. The new transfer is scanned in 4K 16-bit from the original 35mm 2-perf camera negative, and it is enhanced by Dolby Vision HDR. The clarify and level of detail in the transfer is simply amazing. Each and every scene looks as clear and as crisp as it must have looked on the day it was filmed. The transfer offers more detail than any other previous transfer of this movie. You are going to see details in this version of the film that you’ve never seen before. When it comes to restorations of classic catalog releases, Blue Underground is doing a better job than most of the major studios at this point, and The House by the Cemetery is no exception. The disc also includes a Dolby Atmos audio mix to further enhance the presentation of the film.

The special features list for this release cover just about anything you might have ever wanted to know about The House by the Cemetery. The feature disc has a commentary by Fulci historian Troy Howarth, a deleted scene, trailers, and a poster gallery. If that wasn’t enough, the package also includes a separate Blu-Ray disc containing interviews with many actors and writers of the film, cinematographer Sergio Salvati, and the special effects artists who brought the film’s goriest scenes to life. The package itself is rounded out with an attractive matte finish slipcover with embossed artwork.

There’s been no better time to own a home video release of Lucio Fulci’s The House by the Cemetery. If you are looking for a downright gorgeous transfer of this movie and tremendous special features to boot, this is the package you’ve been looking for.

Occasionally, a genre film will attract the attention of a mainstream audience in an "unexpected way".  Maniac premiered in New York City on January 30,...
Read more