50 years later, Daughters of Darkness still holds up as a vampire film that feels just as comfortable at the art house as it does at the grindhouse. Featuring solid performances by a small cast including Danielle Ouimet, Delphine Seyrig, John Karlen, and Andrea Rau, the film endures due to its reliance on character-driven storytelling and atmospheric set pieces with the limited use of effective practical effects. The cinematography and scenery of the film is utterly beautiful, and they’re only enhanced by Blue Underground’s new transfer. 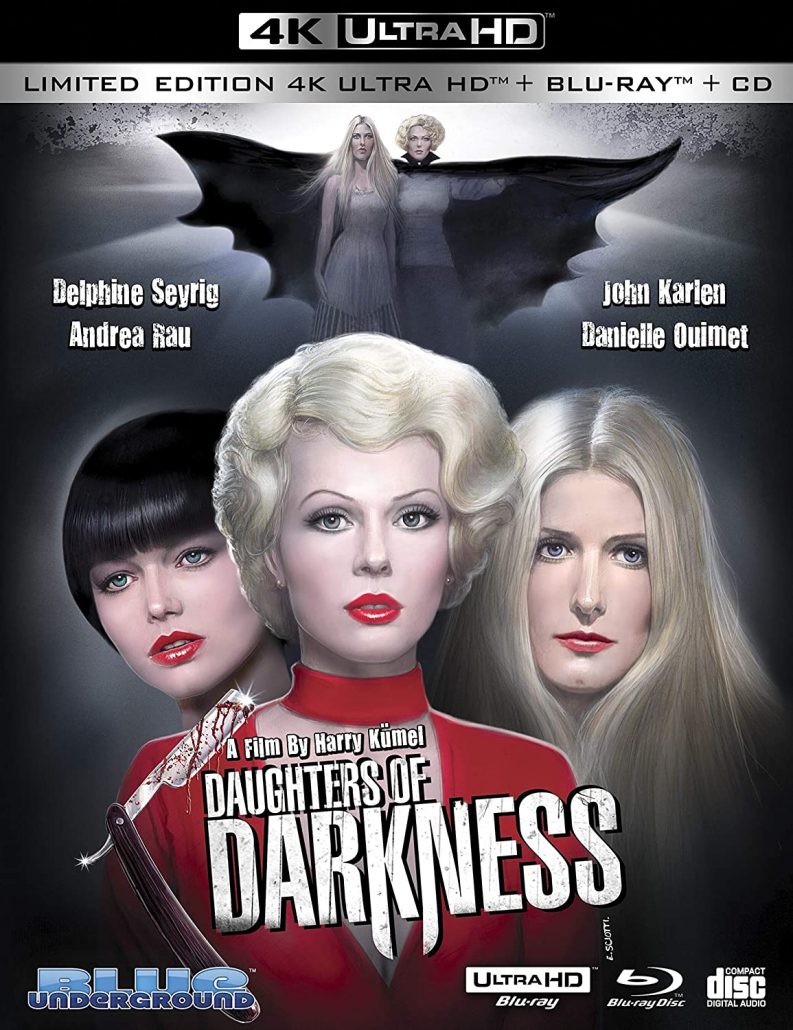 The original 35mm print of Daughters of Darkness was thought to be lost for ages, but the folks at Blue Underground have located it and produced a 4K UHD transfer with stunning HDR that makes it impossible to believe this movie is 50 years old. The film is sharp and textured throughout, especially during daytime and interior scenes. Textures such as the luxurious upholstery of the rich furniture found throughout the lavish hotel in which the story takes place and the beautiful fabrics of the costumes feel like they’re right in your living room. The HDR provides that extra kick wherever its needed, and it’s especially stunning during the final sequence where Seyrig’s sequin dress sparkles and reflects the light in a marvelous manner. The night scenes are sometimes a little dark, but such moments are few and far between, and the well-lit interior scenes more than make up for them. This print is simply gorgeous, and it’s easy to get lost in the film, enjoying just how darn good it looks.

Amazing transfers are the first thing fans look for when deciding whether to upgrade to a 4K UHD edition of a favorite film, and Blue Underground’s got that covered. What’s amazing is that they don’t stop there. This package is packed to the gills with everything you’d ever want to see or know about this movie. Between interviews, commentaries, trailers, stills, and more, this package serves as the ultimate, comprehensive history of Daughters of Darkness. If that wasn’t enough, the physical extras are equally impressive. Featuring an over-sized case with reversible cover art, the package houses the 4K UHD disc, a Blu-Ray copy of the film, and a CD with François de Roubaix’s influential soundtrack. A high quality slipcover with a three dimensional lenticular recreation of the studio’s new cover art completes the package, making it something amazing to look at even when the disc isn’t running in your player!

Blue Underground has long ago mastered the art of painstakingly bringing the overlooked horror classics of yesteryear to cutting edge home video formats, and Daughters of Darkness is no exception. Plain and simple: if you love this movie, you need to own this package!

The Big Fella with the radioactive personality is back--and IDW Publishing and Toho International, Inc. are teaming up to show off Godzilla in a...