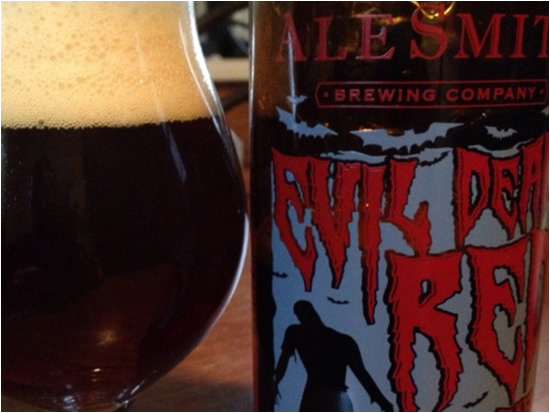 Blood, Guts, and Beer: What to drink with…’The Evil Dead’

As many horror fans know, craft beer and horror go hand-in-bloody-hand. Just check out some of these labels the next time you are in a store that sells craft beer and it’s obvious their love of horror. And with certain sensibilities come certain tastes. All of the incredible beer available these days lends itself to perfect pairings with food and, in our case, with movies. Everyone visiting this site has seen the Evil Dead movies. Below are some selected beers I am sure Ash himself would enjoy. Cheers.

Let’s get the obvious out of the way: Evil Dead Red from Alesmith is a nod to the film and is a solid and serious beer to go with a solid and serious start to one of the best horror franchises. Released each Halloween, this beer is made with horror fans in mind. Deep red in color, this beer is perfect for watching Bruce Campbell develop his acting chops in the most unintentionally cheesy way. As a bonus, the alcohol-by-volume (ABV) is 6.66%.

Founder’s Devil Dancer is a triple India Pale Ale (IPA) with a whopping 112 international bitterness units (IBUs) which is like a punch in the mouth if you aren’t used to it. This will help you relate to Ash as he battles and takes a “dance” with his own possessed hand. “Who’s laughing now” indeed. The 12% ABV helps muster the courage to strap on a chainsaw and fight the Deadites.

Army of Darkness – Necromangocon from B. Nektar Meadery

Army of Darkness is the lightest and most fun of the Evil Dead movies and B. Nektar’s Necromangocon is an ideal fit. Necromangocon (pronounced Necro-Mango-Con) is not actually a beer but a mead. Made with mango, honey, and black pepper, this mead is surprisingly complex, unlike Ash. Try saying “Klaatu Barada Nikto” after a few of these babies.

Described as funky, dark, and sour,  this beer from Surly also sports an ABV of 6.66%. The 2013  Evil Dead is one of the few remakes worth watching. Perhaps even more tense and frightening than the original film, the latest in the franchise promises a new beginning of terror. Like many sour beers, this beer could be a gateway beer for people who have not embraced the craft beer movement yet, also promising a new beginning for many.