Just like when Vince Vaughn stepped outside of his comedy bubble to play the bad-ass lead in 2017’s Brawl in Cell Block 99 (no, we don’t discuss the Psycho remake…ever), Becky sees Kevin James (Paul Blart: Mall Cop) taking a similar, yet much darker step. Similar in that both play prison tough guys with shaved heads and large head tattoos – darker in that James’ characters’ head tattoo is a giant swastika.

While the Kevin James twist is certainly interesting, he’s not the main character of Becky…the main character would be Becky, played by Lulu Wilson (The Haunting of Hill House, Annabelle: Creation). The film opens on Becky being questioned by a cop who is seated across from her. She’s hesitantly giving a male’s description to him but claims to not remember any more than that although the flashbacks she’s having during the scene tell a different story.

We’re then escorted two weeks into the past where scenes of a prison yard fight are cut with scenes of a fight in a school hallway. At the school, Becky is called to the main office where her father has arrived to pick her up from school early while Kevin James and CT HorrorFest alum Robert Maillet are busy in another part of town carjacking, and murdering, an unsuspecting family.

Becky is an angry girl – Lulu Wilson does a great job portraying that right from the get-go; as the story moves forward we learn that the anger comes from the loss of her mother about a year prior. Her dad Jeff, The Soup and Community’s Joel McHale, is also about to fuel that anger even more by telling Becky that he is going to re-marry.

Jeff has planned a nice weekend at their family’s old cabin with Becky…as well as his wife-to-be Kayla (Amanda Brugel – The Handmaid’s Tale) and her son Ty (Isaiah Rockcliffe – The Handmaid’s Tale). The cabin holds tons of memories of Becky’s mom so this news being sprung on her at this time and in this place, with her dad’s “new family” in attendance sets Becky off and she runs off into the woods to her treehouse to be alone.

While Becky is cooling off, Dominick (Kevin James) and a few of his henchmen show up at the cabin while a few others remain out in the woods. As I’m sure you can guess, the cabin turns into a hostage situation and Becky catches the attention of the creeps in the woods. Becky has a choice to make – fight or flee. Becky chooses to fight. How does a teenage girl with no weapons fight a gang of hardened white power criminals with nothing but her wits and the contents of her treehouse? Well, that’s the rest of the movie…and it’s fun.

Revenge films certainly aren’t new but fun revenge films are few and far between – what I mean by that is that revenge films tend to be very dark and unsettling but while Becky is also dark, and super gory, it still manages to handle Becky’s situation with a bit of humor which cuts through some of that darkness and makes for a film that will be more palatable for a wider audience – not just to genre nuts like myself.

Becky will be released digitally and on-demand by Quiver Distribution on June 5th and I recommend that you follow her on her journey – but don’t get to close…or you’re bound to get hurt. 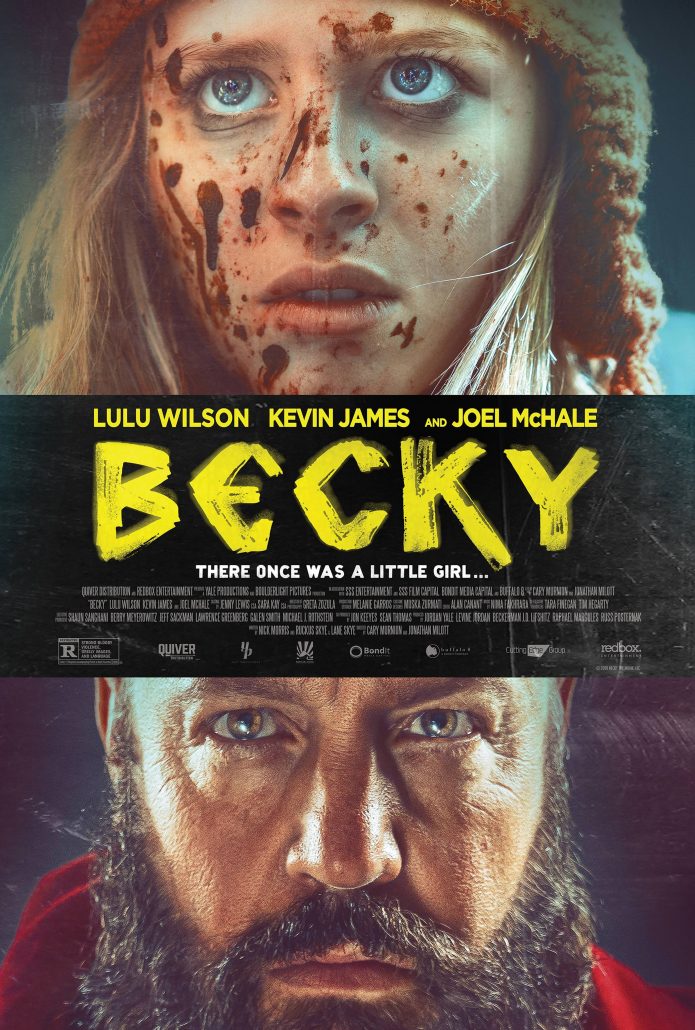 For the most part, when a film crosses the $1 Million mark at a theater there usually isn’t much fanfare. But we now live...
Read more

This past weekend, two horror films dominated America's movie theaters--primarily drive-ins--with both The Wretched and Becky attracting hordes of moviegoers and filling movie coffers. The Wretched, from IFC Films, enjoyed a...
Read more

It's been said there's a fine line between comedy and horror, and Kevin James will test that theory in a new thriller slated for...
Read more