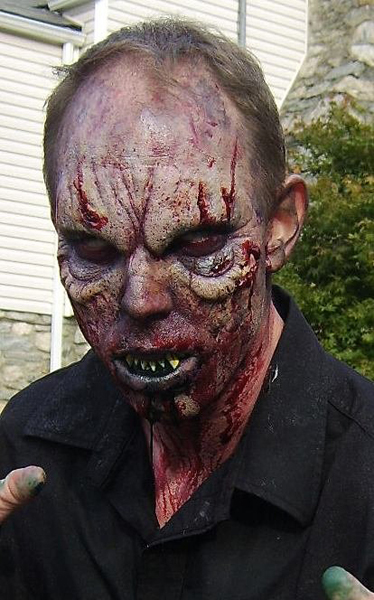 Richard Christy is a true Renaissance man: writer, musician, comedian, actor, director, and, considering how he sacrifices his bodily integrity for comedy, one can even add performance artist to his impressive pedigree. He has been a vital member of the Howard Stern Show since 2004 providing surrealistic bits, relentless prank calls, and gender confusing stunts for millions of listeners. Richard’s artistic career preceded his contributions to the epochal radio show, and he continues to follow his muse wherever it may take him. Christy’s initial talent was for the drums, lending his considerable rhythmic fury to albums by Acheron, death metal pioneers Death (his drumming for the classic The Sound of Perseverance is legendary), Controlled Denial, Burning Inside, Leash Law, and Iced Earth. His current musical project is Charred Walls of the Damned (named after an exasperated response to one of Christy’s prank calls) who have released two albums of soul destroying immensity. Along with comedy and music, horror completes the Christy holy trinity. A life-long genre obsessive, Richard has acted in an eclectic range of horror films such as Albino Farm, Killer Hoo-Ha!, Adventures of Serial Buddies, Lights Camera Dead, and Booley. He has also directed his own zero budget masterpiece Evil Ned 3-The Return of Evil Ned 2: Electric Boogaloo, displaying his wicked satirical vision that encompasses monsters, rednecks, and ducks. His column for Decibel magazine dug deep into the fertile ground of forgotten, beloved VHS atrocities from the days where all you had to go on was the lurid art of the giant clam shell box. His latest genre project is Majestic Loincloth, a “Heavy Metal Viking Rock Opera Homoerotic Medieval Animated Musical” that can be viewed at Richardchristy.com. A fervent champion of the dark holiday Halloween and pumpkin beer, Richard has been a vocal and passionate proselytizer for all aspects of the genre. He was gracious enough to talk to HNN about his love for all things horror: read more read more