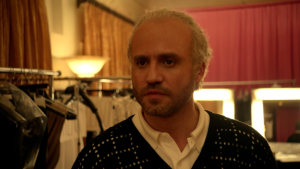 The Assassination of Gianni Versace: American Crime Story maintains its momentum in Episode Two by elaborating on what worked so well with last week’s episode. Like its predecessor, The People v. O.J. Simpson, Assassination offers incredible characterization as it unfolds its exposition through the clever use of flashbacks and present-day storytelling.

Darren Criss is the star of the show with his scene-stealing portrayal of serial killer Andrew Cunanan. Episode Two spends much more time getting to know him, and this ends up being both hypnotizing and traumatizing for the viewer. Criss’ Cunanan projects a special blend of iron confidence and crippling awkwardness. In some public scenes, we get the impression that he could sell bottled water to a fish; but in his private moments we can see him grappling with the fact that his world is unraveling as a nationwide manhunt closes in on him. Depending on the scene and his company, Criss’ character is sometimes unassuming, sometimes charming, or sometimes terrifying. I suggested in my previous review that Criss sometimes takes a page out of Christian Bale’s book when he portrayed Patrick Bateman in 2000’s American Psycho, and I was utterly delighted when Episode Two ended with a scene very similar to Bateman’s “misunderstood” night club conversations. One thing’s for sure: regardless of his inspirations, Criss is delivering an extremely engaging performance of an otherwise detestable character for this program. 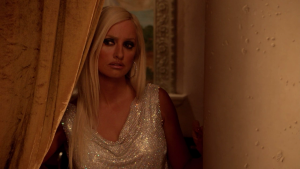 Edgar Ramirez and Penelope Cruz continue to fascinate as Gianni and Donatella Versace. We are beginning to learn more about their complicated relationship, and the two actors effortlessly bounce off of each other’s performances, whether they are being lovingly close or viciously combative. Ramirez portrays Versace as a gentle and loving creator, whose demeanor is sometimes viewed by others as an opportunity for exploitation. Cruz’s character projects a deeply protective character who is occasionally flawed in the execution of her best intentions.

The supporting actors of Assassination are all performing at the top of their game. Max Greenfield is particularly effective as Ronnie Holston, a young man who spends some time with Cunanan before his murder of Versace. Greenfield portrays the character with a certain level of vulnerability that causes the viewer to feel dread whenever the two are alone together. We know what Cunanan is capable of, and we just want Ronnie to make it out okay! Peggy Blow also holds her own opposite Criss in an appearance as Miriam Hernandez, the proprietor of the hotel serving as Cunanan’s temporary residence; and their scenes together are some of the most interesting parts of the second episode. A common theme here is that Criss’ excellent performance only gets better when he’s working with other actors, and Ryan Murphy and his team have selected excellent actors to bring out the best in Criss’ character. 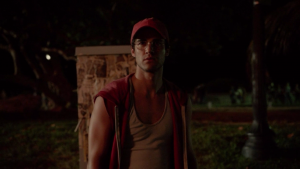 The gorgeous set pieces- whether they be the beaches of Miami or the interiors of elegant buildings- are still a sight to behold in Episode Two of Assassination. However, the series has certainly grown to be even more character-driven by part two. The tremendous excess which stood out like a sore thumb in the premiere seems to fade away and become less gaudy as we get to know the characters behind the tabloids better and better. What seems to be emerging is the fact that this is show is more so about a ruthless killer, rather than his victim. We can’t yet put our finger on why Cunanan is driven to such horrific actions, and that only makes him more unpredictably frightening.

If The Assassination of Gianni Versace continues in this manner, Ryan Murphy has the second hit in a row with his American Crime Story franchise. I am deeply invested in the show’s story and characters, and I am eager to see which dark territories will be explored in next week’s episode!

Stay tuned to Horror News Network for more coverage of American Crime Story as it breaks!