Bruce Campbell will be campaigning to make the “Emmys groovy again” and aim for a Lead Actor In A Comedy Series nom for his role on Ash Vs Evil Dead.  There will be billboards going up in the next week around intersections like Sunset and Fairfax in Los Angeles to promote his role as Ash Williams in the Starz series. He will be taking a less traditional route, with a fan-driven social media and digital paid advertising campaign. It starts tomorrow with four different video ads.

Starz EVP Communications Theano Apostolou said, “If there’s one thing that the 2016 campaign season has taught us, it’s that voters respond to a bold pitch. You can’t really go wrong by getting out of the way and letting Bruce Campbell do what he does best… which is pitch Bruce Campbell. We think his chainsaw hand will help cut through all the noise.”

Lee Majors and Michelle Hurd will be joining the cast in the second season of Ash Vs Evil Dead, which will return later this year on Starz.

You can view two of the ads on Deadline‘s website. 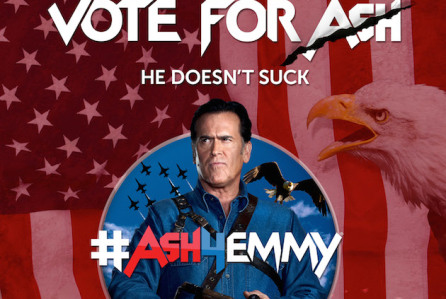 Just one week after the season 2 debut of Starz American Gods, the fates have decreed (and that would be, of course, Starz, via...
Read more