The first two seasons of the horror-comedy series have been a critical success, though the ratings do still leave much to be desired.  The hardcore fan-base of the Evil Dead franchise are solely responsible for keeping the show afloat, which is a shame because the action and writing are incredible and gore factor unparalleled.  Bruce Campbell revised his role from the original films as Ash Williams, the shotgun-wielding, chainsaw-handed time-traveling reluctant hero who is locked in the ultimate battle with the deadites, who are decipals of the Necronomicon (book of the dead.)  Joining Ash in his quest are friends Pablo (Ray Santiago) and Kelly (Dana DeLorenzo), while the wonderful Lucy Lawless portrays his on-again, off-again friend and enemy Ruby.  Starz had previously announced that the show was getting picked up for a third season last October, though no other details were offered at the time.

Deadline reports that the new season will focus on Ash joining up with his long-lost daughter Brandy (Arielle Carver-O’Neill), and it appears that Ruby will once again switch sides and battle the heroes for control of humanity.  Evil Dead franchise creators Sam Raimi, Rob Tapert and Campbell will serve as executive producers for season 3, which is scheduled to open up in Ash’s hometown of Elk Grove, MI.

Ash vs. Evil Dead season 3 will premiere on a Sunday night in February, and is sure to automatically brighten (and bloody) up our new year.  Stay tuned to HNN for more details on the show as they become available! 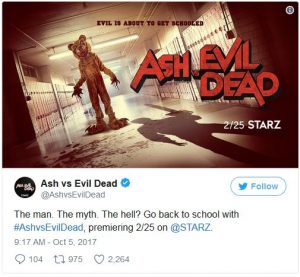