Army of the Damned interview with Tom DeNucci

With a huge cast including big-time horror guys like Tony Todd and Michael Berryman alongside folks like wrestling legend Tommy Dreamer and Godsmack vocalist Sully Erna, how can this movie not be a win? Staff writer Larry Dwyer sits down with writer/director Tom DeNucci to discuss Army of the Damned.

Horror News Network: Hi Tom! Thanks for taking the time to chat. First off, you started your career as an actor and then jumped into writing and directing with your film Self Storage earlier this year. Why the change?
Tom DeNucci: Writing was actually what I initially wanted to do. Then while in film school, I was kind of forced into being in my own projects, just out of availability, not being able to find a lot of actors to work for 12 hours for free, ect. I quickly fell for preforming and have been hooked ever since.

HNN: Do you enjoy that side of the business more than acting?
TD: I’m lucky to have a great producing partner, Chad Verdi, who’s always supported me creatively while leading the charge on the business end of the company. (He happens to be a bit of a business genius) So it’s a great partnership because he’s got such a knack for the business side of things, it allows me to focus all my energy creatively.

HNN: And now you’ve written and directed Army of the Damned; what can you tell me about the premise of the film and how the idea came about?
TD: Chad and I had a discussion early on and we decided we wanted to make The Expendables of horror. A cast assembled with a lot of genre actors combined with a pop culture grab bag; sort of a love letter to old school 80’s horror classics.

HNN: What a great cast you’ve assembled! You’ve got everyone from the legendary Tony Todd and Michael Berryman to musicians Sully Erna and Joey Fatone to the beautiful Jasmin St. Claire and of course, the Innovator of Violence…Tommy Dreamer! I’m pretty sure I’m even missing a good handful of folks! How did you manage to pull together such a cast?
TD: I had worked with Sully on a project, years ago as an intern and knew he always had a passion for acting. I heard him do some voice over work on the project, so I knew he had the chops. He was perfect for the lead so I sent him the script and we went from there. Next we signed a couple of Horror Icons, like Michael Berryman, who I directed in my debut Self Storage and Tony Todd, who really gravitated to the script. We had worked with Joey Fatone in the past and he was perfect to play the fun loving camera man.
I’ve always been a huge pro wrestling fan and got the pleasure of working with Tommy Dreamer and Thea Trinidad in Self Storage, they were small roles, but I got to see what kind of intensity they brought to it. I was impressed so on AOTD I wanted to cast them in more significant roles. I started writing with them in mind as partners, a veteran and a rookie. They answered the challenge with some kick ass physical performances. One of our actresses dropped out at the last minute and fortunately Tommy Dreamer came to the rescue and gave Maria Kanellis a call. She quickly read the scenes, liked the character and agreed to do it. It was one of those great addition by subtraction stories. She was a wonderful and unexpected addition to the cast and really added a lot of value. Producer David Gere brought in David Chokachi, after he read the script and feel for one of the characters.
David and I went back and forth through some e-mails and I really got to know him. When we got together on set it was like we had been buds for years.
Nick Principie who does a lot of the heavy lifting on the comedic side of things, is a close friend of mine and I actually wrote the part for him early on. All in all it came down to the relationships we’ve made on our past films and the actors really being into the script and being excited to jump in.

HNN: How was it dealing with such a large, diverse cast? I can’t imagine it was always easy!
TD: I wish I had some juicy stories for you about infighting and nobody being able to get a long, but the truth is, I’ve never dealt with a more positive vibe on set in my career. Everybody shared one green groom, the spirit was up and there was a lot of support. There was a strong sense of mutual respect all around. The cast all had each others backs and were so eager to make this the best film possible. It was really great. A lot of the cast members still remain friendly long after shooting.

HNN: Where are we on the gore scale in this movie?
TD: I’d say we’re pretty heavy on the gore factor in this one. You’ve got everything from table saws hacking limbs off to exploding heads and throat cuts. The gore hounds won’t be disappointed thanks to the great special effects make up work by Ben Bornstein. He came in and really changed the game in terms of what I was able to achieve on screen in terms of gore, but to me it’s not just about gore, it’s about realism. There’s nothing worse than watching an obviously fake cheesy effect. It takes you out of the illusion.

HNN: It’s pretty obvious that you’re a fan of the genre; what actors and directors influence you?
TD: This is a tough question because there are so many directors that have influenced me over the years, spanning all kinds of genres. Guy’s like Tarantino, Scorsese and The Coen Brothers have always had an impact on me. They’re by no means “horror” guys, but there’s something about how they we’ve violence into their films so artfully has always drawn me in. On the comedic side of things I’m a big John Waters fan and grew up on the Farrelly Brothers. I remember being eleven years old and hearing they were from Rhode Island. I thought that was so cool, they were from a tiny state but the whole world was watching their movies. I didn’t realize it then, but they really opened a lot of doors for people like me.

HNN: What’s the release date for Army of the Damned and where can we expect to find it?
TD: Army of the Damned‘s full worldwide release date is set for 1-14-14 but you can check out the movie right now, on iTunes as well as on Video On Demand, through certain cable providers. Also you can pre order copies of the DVD on Amazon.com. Eventually we’ll be available to over 100,000 million homes worldwide through on demand as well as a DVD release deal through Wal-Mart. We’re also hoping to be in RedBox machines across the country as well. For a film like this, this type of release is about as big as it gets.

HNN: Since I’m a “sometimes” member of the band Blackened, I need to ask how you went about getting the Blackened song Kill the Weak on the soundtrack?
TD: One of our producers, Seth Rosenblit, is also involved in some music ventures as well. He had a connection with Jay Reason who sent me over some tracks for a listen. Right away Kill the Weak grabbed me. It’s one of those songs that kind of just punches you in the face and I had the perfect scene for it, so it was a match made in heaven.

HNN: Fast zombies or slow zombies?
TD: Slow Movers, Call me old fashioned, but you gotta give the survivors a fighting chance.

HNN: Do you have anything else in the works that you can tell us about?
TD: I’ve got a slate of films I’m developing with Chad Verdi and Woodhaven productions. Who knows one of them might just be “Army of the Damned 2“!

HNN: Anything you’d like to leave our readers with?
TD: It’s really been great to make these films in my hometown surrounded by so many talented people. Our crew is young, creative and eager, not remotely jaded and still excited to show up to work every day and take things to the next level. We get better every time and I think it shows on screen.

HNN: Thanks for your time, Tommy! 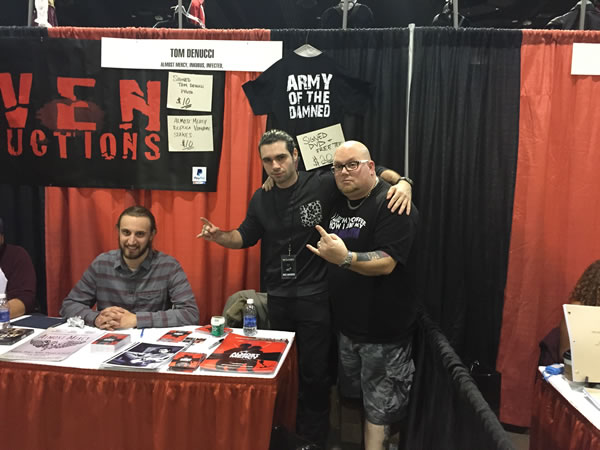 Janus Films will be releasing three classic Godzilla films in drive-ins this month as well as traditional theaters in the future. The three films include...

James Wan is bringing his extensive horror and fantasy background--from the Saw and Conjuring franchises to Aquaman--to bear on a new Netflix series. Archive 81--which draws its inspiration from the popular...

It looks as if a Star Wars fan favorite will move from a Galaxy far away to the Marvel Cinematic Universe. With his time...

Earlier today Netflix dropped the teaser for the fourth season of The Chilling Adventures of Sabrina. Unfortunately for fans, this will be the series...