And if the Conjuring-verse has an MVP, it is undoubtedly the porcelain-faced devil-doll known as Annabelle.  Ever since she was introduced in a vignette at the start of the original Conjuring film, it was pretty clear that she would go on to bigger and better things.  With three films to her name, she is one of the most easily recognizable faces of the horror genre for a whole generation of fans whose first cinematic scares came at her expense.

Although The Nun took the title of most popular spin-off last year,  Warner Brothers has continued to mine the Annabelle character for all she is worth, and she has proven to be an unstoppable force (not even Rotten Tomatoes was able to exorcise her despite the fact that the first film in the series came in at a hellish score of 29%).  And while  John R. Leonetti’s film didn’t please critics, its success allowed David F. Sandberg to create a more adept follow-up film entitled Annabelle: Creation, that expanded on the mythology of the doll.  Creation did even better at the box office and a third film was inevitable.

This time around, Annabelle Comes Home injects the Warrens directly back into the story, and due to this factor, it immediately resonates with fans who only know the doll from The Conjuring, as well as ticket buyers who have seen every installment.  Not only are Ed and Lorraine back this time around, but the man most associated with the series (other than Wan himself), Gary Dauberman, makes his directorial debut.

Dauberman (the writer of every Annabelle film, as well as The Nun) knows his way around the characters and it shows, especially at the start of the film.  The set-up is quick and to-the-point, as we get a glimpse of Ed and Lorraine transporting the doll to their home (although no one said it would be easy…) and establishes the idea that Annabelle acts as a trigger for other spirits, good and bad (but mostly bad).  From there, the narrative shifts almost exclusively to the Warren’s young daughter Judy (played by The Haunting of Hill House alum McKenna Grace).  While the previews do focus on the ghost busting couple, this is really Judy’s story, as the parents only serve as a wrap-around device (and it wouldn’t have made much sense if we never saw Ed and Lorraine).  It is certainly nice to see Vera Fermiga and Patrick Wilson reprise the roles that kick-started the franchise, but their presence in the film is to whet our appetite for the eventual main attraction (The Conjuring 3), while allowing others to take center stage in Annabelle Comes Home (it is also worth noting that if you were a fan of Ed Warren’s vocal stylings from The Conjuring 2,  you’ll get a little more in this film). 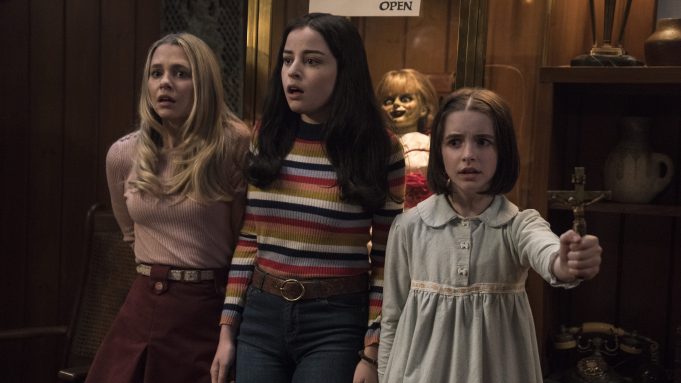 After Annabelle is secured in the Warren’s museum, the story quickly goes in the direction of  paranormal hijinks when Ed and Lorraine need to investigate a case and Judy is left in the capable, responsible hands of  Mary Ellen.  Madison Iseman (last seen in Goosebumps 2: Haunted Halloween) is the perfect girl-next-door, and it is clear that she would be at the top of any parent’s call list.  Mary Ellen is not the type of sitter who would go snooping around any house, let alone the Warren’s kooky collection of cursed artifacts, so the arrival of Daniela (newcomer Katie Sarife) is necessary.  Daniela is the Veronica to Mary Ellen’s Betty (the classic version of these Archie characters, not the distorted Riverdale versions), and she knows how to get herself (and her innocent friend) into trouble.  Iseman and Sarfie play off each other well in stereotypical teenage roles that have been the bread and butter of horror and sci-fi films for the last 75 years.  The setting in the 1970’s helps make these characters (and performances) more believable, and  both actors effectively convey a sense of terror on screen (which is also the standard for any horror film).

Speaking of snooping, you can imagine what happens when Daniela makes an unscheduled visit to the Warren’s vault of horrors, lighting the fuse for Annabelle to wake up all of her fellow prisoners.   Once the creatures are activated by Annabelle, the scares start in a restrained fashion, with Dauberman using silence much more than usual in a film designed for jump scares.  This tension builds in the way that the original Conjuring set up scares (as well as Sandberg’s last Annabelle entry).  Luckily, the glimpses of white dresses, the “now you see them, now you don’t objects”, and practical effects last for a good majority of the film before venturing into less believable territory.

The new monsters (who are certainly being lined up for their own spotlights) vary in effectiveness and interest level.  The stand-out newcomer is The Ferryman, who we rarely see, but the coins that are his trademark are used effectively in some old school style scares, especially one glimpse that quickly evaporates like a stage magician’s exit.  The other demonic forces such as the Bride (very reminiscent of the famous Disney’s The Haunted Mansion’s murderous attic bride) and the Black Shuck (a spectral werewolf immortalized in The Darkness song “Black Shuck”) are seen less and are less effective in holding the audience’s attention (especially the CGI devil-dog, which may not bode well for The Conjuring 3 if they decide to go with the Warren’s famous “human-werewolf” case).  Luckily, there are plenty of other objects to keep viewers attention and the film promotes this (especially at the start) by making the audience guess which one will soon come alive, and in what fashion.

The last 15 minutes of the film go complete The Nun style gonzo explosion of paranormal activity (and it is clear that Dauberman knows who his key demographic is), but the film (like many in The Conjuring series) seems disjointed for this reason, with the first half standing above the second in terms of craft and story-telling techniques.  The film wraps up in a way that may seem too schmaltzy for some viewers (and the majority of the film exudes this innocent PG-vibe so much so that it seems to be a product of a different era, and genre for that matter) but for viewers looking for a Warren’s fix, Annabelle Comes Home delivers safe summer scares and sets up further adventures for everyone’s favorite ghost hunting couple.

As an actress who has made a successful career in the genre of horror, Vera Farmiga will take on her next film Bad Bloom...
Read more

Acclaimed filmmaker James Wan is getting back to his roots--good, old-fashioned horror--with Malignant. The storyline of the Warner Bros. film--slated for a theatrical release later this...
Read more

Maybe--just maybe--the Devil made them do it. In a move that may herald a trend in this pandemic-plagued world, WarnerMedia this week said it would...
Read more

Professor Abraham Van Helsing--once described by Dracula himself as a wise man "for someone who has not lived even a single lifetime"--is about to...
Read more