American Horror Story: Roanoke reached the mid-season mark at an unlikely place in terms of the history of the franchise.  The fact that episodes one through five of season six  ended with a somewhat coherent and highly original take on the popular ghost documentaries that are found on SyFy, the Travel Channel, and Destination America (along with the requisite “dramatic re-enactment” story-within-a-story approach) was a true achievement for the series.  Unfortunately, the debut of the “real story” twist in episode six does more to detract from the high water mark established in the first half of the season than humanly possible.

In the spirit of full disclosure, American Horror Story and I have had a bit of a checkered past.  I’ve only been able to make it through one season (Season Five’s Freakshow) and that was with the additional aid of the fast forward function of my trusty remote.  My critique of the series on a whole has always been the fact that each season starts with a traditional horror concept (haunted house, mental institution, witches, etc.), but then other unrelated horror and non-horror elements are added to the mix (serial killers, aliens, musical numbers, etc.) not to improve the story or characterization or to add layers to the existing story-line, but to shock and surprise the audience for the sake of cheap shocks and surprises. 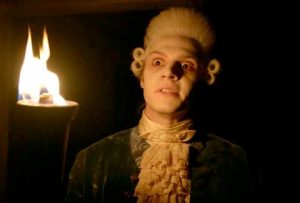 After watching Ryan Murphy’s American Crime Story: The People vs. O.J. Simpson, I decided to give AHS another chance.  The fact that Murphy was able to tell a compelling, well-known story and yet was still able to keep the story fresh, exciting, and engaging  convinced me that this was perhaps a creator who was about to hit his stride.

I was not disappointed when I initially turned in to Roanoke.  Here was Murphy’s approach to a well-known staple of horror cable television: the paranormal “true story”.  Why no one had the idea to do this before Murphy is beyond me, but boy did it work.  Roanoke contained all of the elements that any viewer of Paranormal Witness or Haunted could recognize: the talking-head interviews, the exaggerated re-enactments, the poor casting of the storytellers’ doppelgangers, and the questionable eye witness accounts.   This season worked as a satire of the genre and still managed to scare viewers.   Yes, there were some “very familiar” scenes and props (Blair Witch stick figures anyone?) that have come to characterize the “homages” (or thefts) that the show is known for as well as the inexplicable addiction of a murderous pair of nurses sub-plot, but on a whole, the balance of interviews, re-enactments, archival footage, a 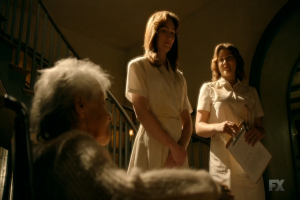 nd expert testimony that define “the ghost docudrama” set this season apart from the rest.

Yet, just like an overzealous psychic who is ready to announce that “this house is now clean”, I believe I spoke too soon.   Episode Six’s big “you don’t know the true story!!” reveal is a disaster.    You better sit down for this plot twist.  So, now we are asked to follow an overzealous television producer (Murphy?) that wants to capitalize on the success of his Roanoke Nightmare and bring the actors and real people back to the scene of the crime.  Like MTV’s early 2000’s paranormal program Fear, the group is tasked with surviving three nights at the haunted house during the blood moon.  Not the most original idea, but wait, there’s more!   It seems like the actors who portrayed the “real people” have been having some trouble.  One actor has delusionally “become” the character, another has succumbed to the same alcoholism that plagued her subject, and another had an affair with, not his co-star, but with the “real wife” of the interviewed couple.

I’m willing to accept the multiple ghosts, pig-men, and flamboyant psychics, but these characterizations of the life on the other side of the camera are ridiculous.  In fact, I’m more apt to believe Ace Frehley when he blames ghosts (and not his former vices and poor decision making) for the destruction of his personal life and fortune on Celebrity Ghost Stories.

People are so used to reality television at this point, that “pulling back” a hyper-real curtain is not interesting to anyone, especially when it seems so unbelievable.  The performances of the actors who just an episode ago were making viewers care, come off wooden in this episode and all appear to be going through the motions.  At one point in the episode, a TMZ-style news crew catches the cheating couple (screen husband-real wife) together.   One thing that a fan of these ghost documentaries knows for sure is that no one telling the stories or appearing in the re-creations are in any way famous.  Hollywood actors are not taking these roles; anonymous people are.  The show itself is what you tune in for and “the ghost of the week”.  I’ve never finished an episode of Paranormal Witness and turned to my wife and said “Wow, that actor really captured the essence of that weirdo telling their ghost story.” 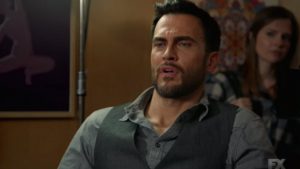 The worst part of the episode (and it’s tough to narrow that down…) happens when an assistant to the hot-shot producer has seen enough and leaves the shooting location, speeding away in her car.  Did you think this moment wouldn’t be captured on film? Fear not, because she has a handy dashboard cam that luckily allows her to speak to the audience while she “gets the heck out of Dodge”. Wait, who is that person dressed in…ahhh!!! There is a man with a pig on his head in her backseat!!! Crash!! Camera goes to black. Thanks Mr. Murphy.  I stayed up until 11:00 p.m. for this?

Without an intricate blue-print to follow (ala American Crime Story), Murphy eventually goes “back to the well” (or should I say his film collection) once again.  One episode in to this “new direction” it looks like a madman’s mix of Natural Born Killers, Paranormal Activity, The Blair Witch Project, and Wes Craven’s New Nightmare.  Combine these swipes with the conceit of the “reality” television format and you have one hell of a mess, especially when compared to how this season started.

Will I finish this series?  I can’t really tell at this point.  I will definitely give it one more episode, but after such a promising start, it seems like the patented AHS formula of excess and cognitive dissonance is back in full force.   That’s a different type of horror(ible) story…

Horror fans anxious for the debut of the Netflix series Ratched--the prequel to the classic One Flew Over the Cuckoo's Nest--will enjoy the final trailer released this week. The nearly three-minute trailer--which...
Read more