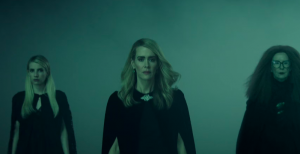 The first two episodes of FX’s American Horror Story: Apocalypse lacked even a hint of the highly-touted crossover spectacle the season was promised to feature. Well, that moment finally comes in the last two minutes of Episode Three, after Michael Landon (Cody Fern) kills off the entire new cast (except for Kathy Bates’ Miriam, because- surprise!-  she’s a robot now), and the witches from Season Three’s Coven waltz into view. By Episode Four, we’re knee-deep in crossover territory, right down to an unexpected return to American Horror Story: Hotel‘s Hotel Cortez. Fortunately, all of the returning faces of yesteryear- including Emma Roberts and Gabourey Sidibe- don’t slow down the progression of the story and, despite the occasional flashback, actually end up keeping things moving forward. And, while there’s no shortage of ridiculousness to go around, this manages to be one of the most engaging seasons of American Horror Story in years.

By the end of Episode Four, I found myself marveling at the low quality CGI effects and whimsical storytelling surrounding a warlock school for boys and an emerging witches-versus-warlock storyline. Gone are the moments of in-your-face gore for the sake of shock value… they’ve been traded in for levitating characters and rose petals that turn into butterflies. But I’ll take Harry Potter tropes mixed with dark imagery over dismemberment and insane violence with no storytelling to back it up any day of the week… and the feud between the witches and warlocks seems to be a natural progression of the storyline established in Coven. Some of the best moments of the past two episodes are the ones where Michael saves Queenie and Madison from their fates, and we get to see these characters all interacting with each other. His earlier scenes as a wunderkind who doesn’t really ever have to learn or earn anything are far more grating by comparison because they’re largely achieved in a dramatic vacuum and amplified by silly special effects like indoor snow. Fern is an incredible actor, and his best work can be seen in the subtleties of his reactions to those around him. Hopefully, going forward, his powers will continue to be demonstrated through the kind of psychological manipulation found earlier in the season than over-the-top wizardry. 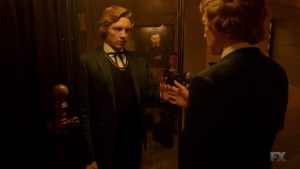 Needless to say, the slow reveal of American Horror Story crossover madness ended up working well for the new season, and I am thoroughly engaged in seeing where the story goes. Frankly, showrunner Ryan Murphy isn’t exactly known for restraint when it comes to AHS story arcs, and it’s actually quite surprising that we’re four episodes in and the fan-favorite Murder House and its ghoulish inhabitants are nowhere to be found. This deliberate slow crawl is a welcome change of pace for the series, and it means there are plenty of surprises still in store. The early talk about this season exclusively mentioned a Murder House and Coven crossover, but Evan Peters’ James March appeared at the Hotel Cortez. Does this mean that characters and/or settings from Asylum and other popular seasons may also appear by the end of this season? If they’re effectively threaded throughout the story like this recent Hotel bit was, longtime fans of the series could be in for a real treat!

I didn’t even make it to the end of Episode Four of American Horror Story:Cult, and my viewing track record for other recent seasons of the series isn’t much better. However, despite the hokey nature of the season’s magical effects, I am looking forward to seeing where this season is headed.

An actress best known for her juicy roles in American Horror Story and Scream 4 now has a "stake" in a new vampire series coming to Netflix. Emma Roberts will produce the...
Read more