AMC To Produce Series Based on Joe Hill’s ‘NOS4A2’

The announcement is both a big win and a big gamble for AMC.  While the jury is still out on new show The Terror, the network has not seen many hits outside of the zombie genre.  Partnering with a hot name in the horror literary world like Joe Hill is sure to energize both camps and fuel the fire for another TV hit.  AMC will give NOS4A2 a 10-episode run, following on the heels of the show being one of their “scripts-to-series” developmental projects last summer.  Two current shows which followed the same model were The Son and Lodge 49.  The network hopes the combination of Hill and O’Brien will give this series more mainstream appeal and staying power.

NOS4A2, first published in 2013, follows a young artist named Vic McQueen, who uses her supernatural powers to track down a villain named Charlie Manx.  A serial killer who hunts down children, Manx banishes his victims to a twisted and ironic hell called Christmasland, where being anything but happy (even among a world of unimaginable horrors) is not allowed.  McQueen must battle Manx to save both the children and herself, and ensure that he is not allowed to continue his campaign of terror.

No further details regarding the NOS4A2 series have been announced, but expect the show to premiere on AMC sometime in 2019.

Stay tuned to HNN for more news on this big project as it breaks! 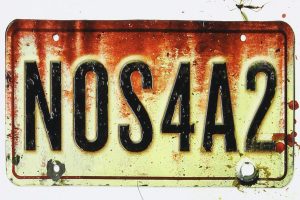 If you love horror stories (and the movies made from them) and want to learn more about their eerie origins, here's some good news:...
Read more