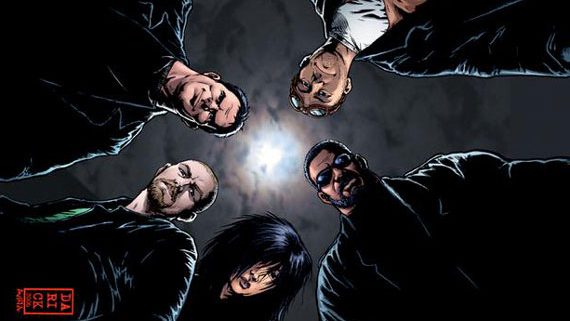 Amazon Studios’ head of scripted series Sharon Tal Yguado stated that “In a landscape saturated with superhero shows, The Boys is the next evolution in this popular genre.  With Eric, Evan, Seth and Original Film all behind this series, we are excited to adapt this popular comic, from the visionary minds of Garth Ennis and Darick Robertson, for television.”

It has also been confirmed that “Supernatural creator Eric Kripke will serve as creator and showrunner on the project, which will be directed by Rogen and his producing partner Goldberg.”

For those unfamiliar with the comic, in typical Ennis fashion, “The Boys takes places in a world where superheroes embrace the darker side of their massive celebrity and fame and centers on a group of vigilantes known informally as “the boys” who set out to take down corrupt superheroes with no more than blue collar grit and a willingness to fight dirty.”

The Boys will begin filming in the spring of 2018 for a 2019 release on the retail giant’s Prime video service.

Staff Writer at Horror News Network
Nick joined the website in 2015. His lifelong love of comics and horror began with Universal Monsters and the Incredible Hulk. He has fond memories of going to Waldbaum’s supermarket with his mother and being rewarded with a 3-pack of sealed comics. It’s been all downhill from there… Since those early days, his life has been immersed in four color action and scares on the silver screen.
http://www.horrornewsnetwork.net/wp-content/uploads/2017/11/the-boys-comic.jpg 340 570 Nick Banks http://www.horrornewsnetwork.net/wp-content/uploads/2016/05/HNN-logo.jpg Nick Banks2017-11-10 04:00:392017-11-10 04:00:39Amazon Orders Full Season of Garth Ennis Comic Adaptation 'The Boys'
0 replies