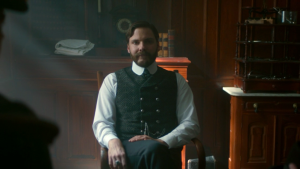 It ain’t easy getting into the premier cable television series racket… the competition is maddening! There are currently more networks than ever looking to assemble an A-List cast and cobble together some feature film-quality cinematography to get a taste of those sweet, sweet ratings and awards season buzz. After decades of airing reruns of ER and Hondo, TNT is looking to enter the game with The Alienist, a period crime drama based on the 1994 novel of the same name by Caleb Carr. Frankly, they couldn’t have picked a stronger source text for such an undertaking, and they’ve spared no expense with the talent and production values of the show. The pilot episode, entitled “The Boy on the Bridge” reveals a series which- on the surface- looks like it might hold up next to the offerings of TNT’s more experienced competitors, while simultaneously displaying some warning signs about its long-term performance.

If you’ve read the book, all of its grisly contents are on display in the first episode of the series. An unknown killer is committing unspeakable murders, and it’s up to a team of professionals on the verge of a new manner of scientific thinking to understand and capture the culprit. The streets of New York circa 1896 are on full display in high definition, along with atmospheric fog and grime to flesh out a moody and dreadful setting for the scene of an unspeakable crime. If you haven’t read the book, you know the drill if you’ve seen any dark period piece such as FX’s Taboo, Showtime’s Penny Dreadful, or HBO’s Boardwalk Empire. Actors who belong on movie screens? Check! Elaborate, sprawling sets and ornate costumes of yesteryear? Check! A double-dose of adult themes to show they mean business? Check! This has all been done before by more experienced networks, so The Alienist will live or die by how well it adapts its strong source material and the performance of its actors.

The Alienist‘s starpower comes in the form of Daniel Brühl (Inglourious Basterds, Captain America: Civil War), Dakota Fanning (War of the Worlds, The Runaways), and Luke Evans (The Hobbit, Beauty and the Beast). Brühl plays Dr. Laszlo Kreizler, a psychologist on the verge of establishing modern protocol for the psychological profiling of deviant offenders. The series takes its name from his profession… an early term used to describe his trade before the folks from Netflix’s Mindhunter came along to perfect the craft nearly 75 years later. Evans plays John Moore, a newspaper illustrator who at first doesn’t seem happy with the subjects Kreizler is asking him to sketch. Fanning completes the trio as Sara Howard, the first female employee of the NYPD who gets indirectly sucked in to working with the gang when a new homicide ends up looking suspiciously similar to the gory characteristics of a previous case involving the murder of children. 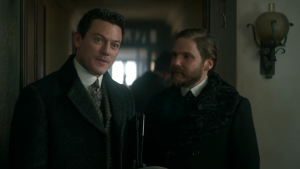 Make no mistake: these are excellent actors. I know they can deliver outstanding performances because I’ve seen them deliver them in other works. The problem so far is that they don’t always deliver them in the first episode of The Alienist. They’re all dressed for the parts, they look like they’re giving their all, but something… happens… when they open their mouths and speak their lines sometimes. Carr’s book is very verbose and dialogue-heavy, and he returns to the series as a writer of two episodes (along with Cary Joji Fukunaga of True Detective fame), but I don’t recall so many conversations being this awkward in Carr’s book. Sometimes the characters come across as though they’re reciting something which would never be naturally stated in a discussion between human beings. Sometimes the expressions are so wordy that the performers tend to deliver weaker physical performances because of their focus on satisfactorily repeating such complicated combinations of phrases. Again, this doesn’t happen all of the time, but when it does it can pull the viewer out of a scene entirely. I hope this is a symptom of trying to cram a lot of exposition into the pilot episode in order for the story to make sense rather than a consistent problem with the show. The characters of The Alienist are interesting, but we need to be able to believe that they mean the words that are coming out of their mouths at all times.

The production values of the show are excellent. The Alienist recreates the dirt and stone of 1896 New York City just as well as any big budget film set in a similar period. TNT clearly wants to show they mean business about entering the potentially lucrative world of adult dramas, and the pilot episode surprised me with its graphic portrayal of adult themes and violence. For a basic cable program, they seem to be pushing the standards of appropriate content to the very limit. The filmmakers don’t pull any punches with their depictions of the nature of the series’ grisly criminal and his crimes through the eyes of Dr. Kreizler and his associates. But then again, the story wouldn’t exactly make sense if it didn’t fully explore just what exactly it is that an alienist does. Popular shows like Mindhunter have the benefit of keeping the series’ dark themes on the periphery because its protagonists are largely studying disturbing crimes long after they’ve been committed. The cast of The Alienist, on the other hand, find themselves right down there in the weeds of the chaos of a bloody crime spree, so no holds can be barred for the viewer’s benefit. 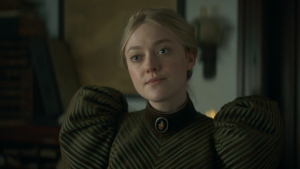 I keep referencing David Fincher’s Mindhunter because it’s clear that Fincher’s work has inspired the television adaptation of The Alienist. It’s detail-oriented, its exact, it goes to dark places, and it delivers it all with cinema sheen and theatrical sound. Sometimes this works, like during the show’s brief but engaging opening sequence and its portrayal of vintage New York City as a living, breathing place. Other times it doesn’t, like when it sounds off some problematic moments with the show’s score. By all means, Rupert Gregson-Williams’ (Wonder Woman, Hacksaw Ridge) Hollywood score for this series is not bad… but sometimes it feels out of time and place for a show that is supposed to be happening in 1896. Parts of the score sometimes get a little too modern to match the action on screen. There isn’t anything particularly wrong with anachronistic music in a period piece so long as it makes sense and is well-placed; but sometimes the industrial element of the show’s score seems to overpower the scene and remind the viewer that we’re watching actors play dress up and walk around in a set meant to look like the past. Time will tell if the music is better placed in future episodes.

I realize I’ve done a lot of complaining in my first review, but this doesn’t mean I’m not looking forward to future episodes of The Alienist. The series displays several promising features, and I know from reading the book that it’s going to get a heck of a lot more interesting in future episodes. It’s just that the folks at TNT are going to have to work twice as hard to perfect The Alienist and their other upcoming original programs if they want to become the next FX of “basic cable-turned best in the business of mature drama programming.” The stakes are high and the TNT is bound to be scrutinized as the network attempts to prove its merit with future episodes of the remainder of The Alienist. The series has a lot going for it, but it also has a lot riding on it. Here’s to hoping that The Alienist‘s positive qualities prevail as it continues its run!

Today at the Television Critics Association panel for The Alienist, series lead Dakota Fanning and other cast members had a chance to talk about...
Read more

The next installment of the popular TNT psychological thriller The Alienist debuts this Sunday, July 19 with the first look at The Alienist: Angel of Darkness. This anthology...
Read more

Netflix has a new series coming out called Maniac. It's not based on the ultra-violent 1980 William Lustig film, but it still looks pretty darn...
Read more