After firmly establishing himself as an auteur of a generation with Ex Machina and Annihilation, writer/director Alex Garland partners with FX and Hulu on Devs, a series that serves as an extended meditation on the themes and motifs of his previous work while pushing his breathtaking visual designs and auditory atmospheres to new limits. Featuring a stellar cast- many of whom are delivering the performances of their careers- Devs achieves a complex blend of the unusual and the familiar and offers a satisfying home theater experience for our current life and times. 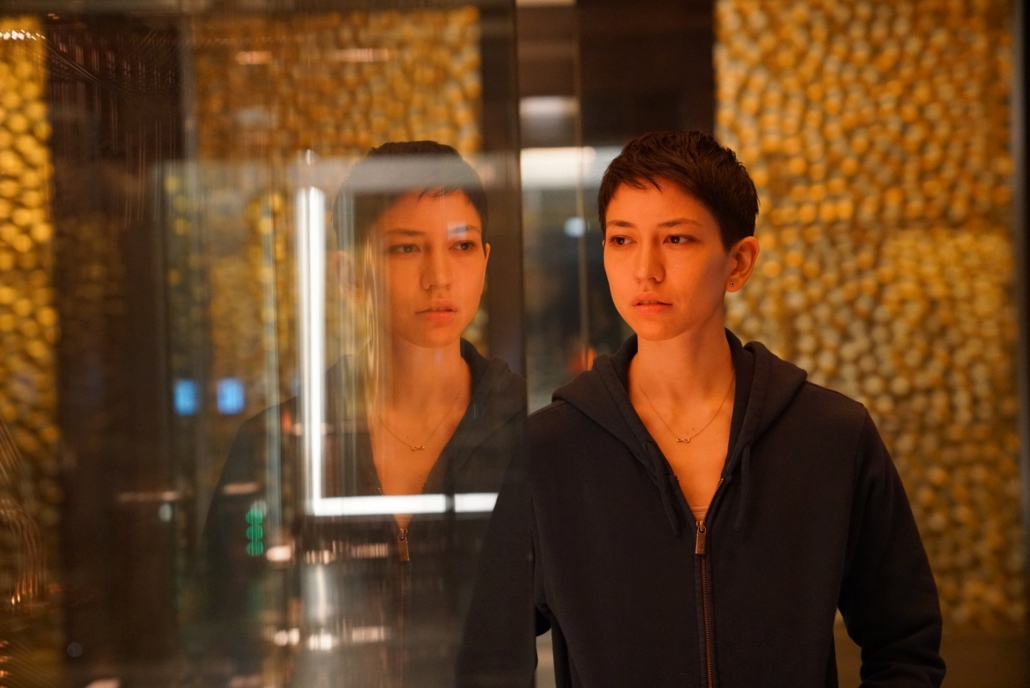 On the surface, Devs follows a storyline that doesn’t stray too far from the tropes of many television series. Sonoya Mizuno plays Lily, a woman who works for a big tech company and begins to unravel a tangled web of corruption and murder at the hands of her powerful bosses and competing agents of international espionage. This familiar story foundation serves as a solid introduction for mainstream audiences who may be less familiar with Garland’s more abstract moments (like the ending of Annihilation), and it keeps the viewer engaged on these conceivable topics while continuously introducing more and more complex ideas like millions of alternate timelines and predetermined futures. Where these concepts come across as more enigmatic in Garland’s shorter works, the extended runtime of a series allows Devs to grab the audience so they’re right there with the characters, fully aware of what each nuanced decision and outcome means for the story and its characters. There is a lot to unpack about what Devs says about human nature, free will, and why things happen the way they do, and audiences can spend months debating its theories.

Devs is enhanced by a visual and auditory design which mimics the dichotomy of its simple-yet-complex storyline. There are lush sweeping shots of beautiful contemporary city skylines and tree-covered rolling mountains. But the striking gold and red colors and metallic machinery inside of the Devs building complex are anything but familiar to the audience. Garland improves on the futuristic interiors of Ex Machina with these visuals, and many of the shots in the series are pure visual delights. Garland knows it too, and the camera lingers on the impossibilities of a gravity-defying horizontal elevator and a computer core that looks like it was designed in collaboration by Victor Frankenstein and Nikola Tesla. There isn’t another show on television that could match Devs‘ level of set design and cinematography. 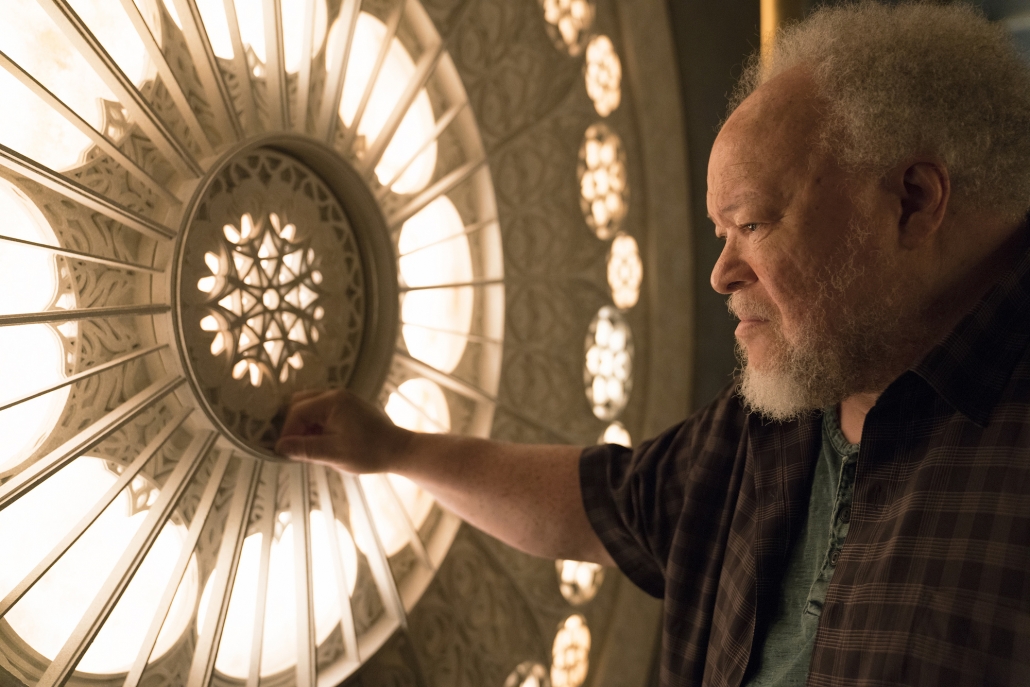 The sounds of Devs also walk the line between the familiar and the exotic. The score could be classical and reassuring at times and ominously jarring at other times. Garland accents some scenes with groovy rock tracks like “Congregation” by Low, which make for extremely memorable moments, and then he goes and ends episodes with the most disturbing grunting noises ever committed to the end credits of anything in history. Like everything else with Devs, Garland structures the sound design in such a manner that the viewer is eventually conditioned to go with the flow no matter what ends up popping up next in the soundscape, and it allows for a distinct and memorable listening experience. You will want to re-listen to many of these tracks, and you will never be able to separate some of them from the visuals they accompany.

Despite all of these incredible achievements in storytelling, cinematography, and sound design, the superb acting of Devs still somehow manages to stand out as its greatest feature. After working with Garland on Ex Machina and Annihilation in smaller roles, Sonoya Mizuno is finally given the opportunity to shine as the series lead, and she knocks it out of the park with a complex and nuanced performance as Lily. Mizuno is one of those rare performers who come along once in a generation and are able to completely disappear into a role. Sonoya Mizuno of Devs simply isn’t the Sonoya Mizuno of Maniac, or the Sonoya Mizuno of La La Land, or the Sonoya Mizuno of Crazy Rich Asians. She has the supreme gift as an actress to completely change everything about herself and present brand new human beings each and every time she settles into a new role. Her voice, her look, her mannerisms… all different, each and every time. Mizuno’s Lily is strong, yet vulnerable. She’s capable, but also held back by incredible existential forces. Mizuno performs Lily’s natural responses to these unrealistic challenges with a wise understanding of human nature. Devs makes one thing crystal clear: Mizuno is an actress whose body of work will offer a breathtaking spectrum of multidimensional characters and personalities. 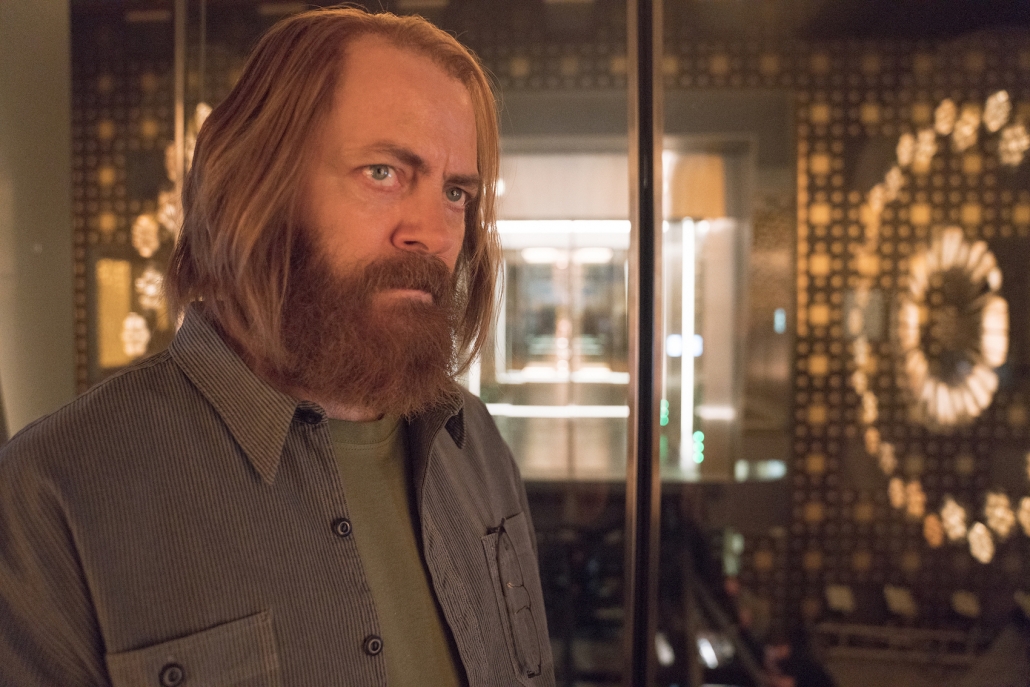 Nick Offerman plays against type with Forest, the mastermind behind the Devs program and the architect of the conspiracy that establishes the foundation of the series. Offerman reinforces the notion that comedic actors are capable of delivering groundbreaking dramatic performances, and some of his greatest scenes ever committed to film are in Devs. You simply have never seen Offerman in such a complex state of fragility, vulnerability, and obsession bordering on mania. When it comes to the character studies of Devs, nuance is the name of the game. And Nick Offerman delivers it in spades. The same can be said for Alison Pill, who plays Forest’s true-believing assistant and partner and Zach Grenier, who plays his hard-boiled head of security with a questionable sense of morality. Longtime stage actor and former August Wilson collaborator Stephen McKinley Henderson is given some much-deserved time to shine in Devs as Stewart, an elder member of the Devs team who hasn’t lost track of his views on humanity. While his role doesn’t deviate too far from his recent work in Fences and Lady Bird, it’s a genuine pleasure to watch his character pontificate on screen and set nearly every other character straight every once in a while. For Devs, Garland established a brilliant ensemble cast, and he allowed them all to have memorable moments and to play off of one another in some of the most engaging human interactions committed to a television series.

While their content and tone couldn’t be further apart, I can’t help but explain Devs by referencing Twin Peaks. Like how David Lynch approached Twin Peaks, Garland offers mainstream programming in Devs that doesn’t delve too far into the independent material he’s also capable of producing. No one would ever accuse Twin Peaks of not being strange, but compared to some of Lynch’s other work it stands out as some of his most accessible titles. The same thing goes for Devs: it delivers all of Garland’s trademark qualities without alienating a mainstream audience or causing viewers to disengage. With Devs, Garland achieves a balance that makes for a satisfying viewing experience even for those who aren’t terribly familiar with his previous work. And in the age of shrinking movie theater space for anything that isn’t an animated feature or a superhero blockbuster, Devs shows that a supportive network like FX or Hulu may be the best place for the greatest filmmakers of our time to let their cinematic visions breathe in the form of a television series.

Alex Garland- the visionary writer/director behind such films as Ex Machina and Annihilation- is set to focus his attention on the small screen for an upcoming technological...
Read more

The winter of 2017 was a banner season for horror films, with Split and Get Out dominating the box office, beginning one of the...
Read more