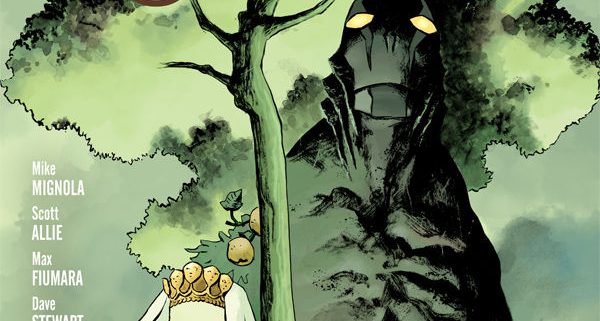 Synopsis:  Abe struggles with returning to the dangerous world after finding “paradise”.

Answers regarding Abe’s past and Gustav Strobl’s master plan are coming fast and furious as this story arc (and possibly title) heads for an explosive climax.  After the backstory of the original struggle against the Ogdru Hem was revealed last issue, Abe finds himself in an idylic setting for a change. And he’s not the only one, as his friend Grace and her companions from the early issues of the series and Abe’s journey are seen adjusting to a new way of life, without the horrors they were so used to.  The “too-good-to-be-true” vibe that Allie establishes is perfectly encapsulated in this scene as Alice writes a hopeful letter to Abe and send it “seaworthy” in a bottle.

Abe also seems to be relaxing for a change in a lush fairy world which finally brings together Hellboy and Abe’s stories with the introduction of Alice into Abe’s world and he begins to learn about Hellboy’s sacrifice.  Abe’s refusal to return to the fight is understandable and part of every hero’s journey at some point in their quest, and Abe deserves a rest more than most heroes!

Max Fiumara’s art does an excellent job of juxtaposing the idyllic settings of Grace, Alice, and Abe with the dark, sharp, and dangerous land that Strobl explores in this issue.  An overgrown Saint-Sebastien is the place where an ominous transformation takes place and it is crystal clear where this showdown is headed by the end of the issue. 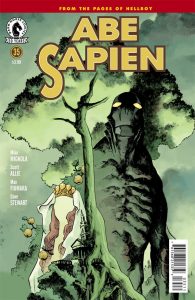 Staff Writer at Horror News Network
Nick joined the website in 2015. His lifelong love of comics and horror began with Universal Monsters and the Incredible Hulk. He has fond memories of going to Waldbaum’s supermarket with his mother and being rewarded with a 3-pack of sealed comics. It’s been all downhill from there… Since those early days, his life has been immersed in four color action and scares on the silver screen.
http://www.horrornewsnetwork.net/wp-content/uploads/2016/07/Abe35.jpg 923 600 Nick Banks http://www.horrornewsnetwork.net/wp-content/uploads/2016/05/HNN-logo.jpg Nick Banks2016-07-08 17:06:022016-07-08 17:06:02Abe Sapien #35 Early Review
0 replies