A Nightmare on Elm Street Movie News and Updates

Will Nightmare on Elm Street be the next horror franchise to get a reboot?

A Nightmare on Elm Street is a cherished horror classic and in this day and age of horror reboots, it is only a matter of time before we see Freddy haunt the dreams of teenagers once again. Unlike other franchises, Nightmare featured a serial killer who was not only twisted, but quick-witted as well. Therein lies the problem in rebooting this series as replacing Robert Englund, a role that he defined, would be no easy task.

While we wait for future updates on the series, you can catch the original Freddy, Robert Englund, on the next season of Stranger Things. The seasoned actor also channeled Freddy in this Covid-19 PSA and he is serving as host of True Terror on the Travel Channel.

The History of A Nightmare on Elm Street
A Nightmare on Elm Street, written and directed by the legendary Wes Craven, was released theatrically in the United States on November 9th, 1984 and took in just $2.3 million in that initial 3-day weekend period.  This would prove to be an anomaly, as word-of-mouth and an impressive television marketing campaign would push the unheralded horror film to an eventual worldwide gross of $57 million and launch one of the most successful franchises in movie history.  The entire franchise would eventually top $500 million worldwide, making it the third-highest horror series of all time (behind only Halloween and Friday the 13th.) 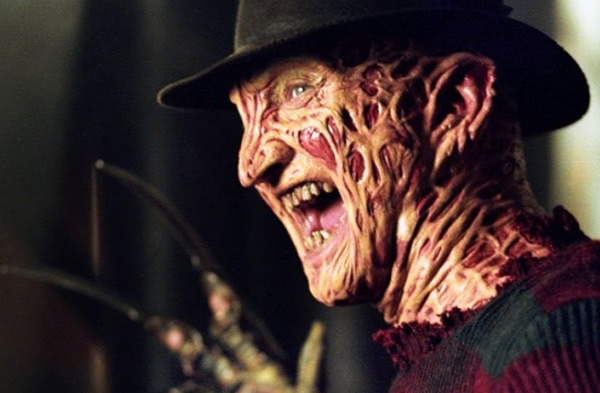 It has been said that Craven developed the basis for the film on a group of refugees from Khmer who fled the genocide in their home of Cambodia in the 1970’s but suffered from paralyzing (and even deadly) dreams after settling in America.  The film’s killer, the iconic Freddy Krueger, was the namesake of childhood bully in Craven’s early years, as the legend goes.  The director would also change the backstory for Krueger before going into production from a child molester to a serial killer to avoid any similarities between an ongoing spathe of child abductions in California at the time.  The 2010 remake would revive the child molester angle as its basis.

Craven began writing the screenplay in 1981 and shopped the script around to several major studios.  He dodged a bullet when it was reports that Walt Disney Pictures showed interest but insisted that the violence and overall tone be toned down to fit their standards.  Other companies would pass after internal discussions for various reasons when a fledgling company, known more for distributing films rather than producing them, entered the picture.  New Line Cinema agreed to make Craven’s film and provided him with a budget of just $1.8 million.  Robert Shaye, the head of New Line, would be credited as producer on the film as well as the five sequels that followed.

Casting for Nightmare was not a long process, as relatively young unknowns were chosen for the key roles.  Some would go on to massive success in Hollywood, such as Johnny Depp, but at the time the biggest name on the roster was John Saxon.  Originally the part of killer Freddy Krueger was given to David Warner; however, due to scheduling conflicts the iconic sweater-wearing child killer was recast and bestowed upon Robert Englund.  It’s an alter-ego that Mr. Englund continues to reprise, nearly forty years after he first donned the burnt skin and razor glove.

Production began in June of 1984, with principal photography wrapping up in July.  With a planned November release, this left little time to complete the process and ship the prints.  Though A Nightmare on Elm Street is set in Springwood, OH, the actual house used for Nancy and her family was in Lost Angeles with other scenes shot in the surrounding locales.  The film would go on to nearly make its budget back by the end of opening weekend and would end up garnering $25.5 million in North American box office receipts and $57 million worldwide. 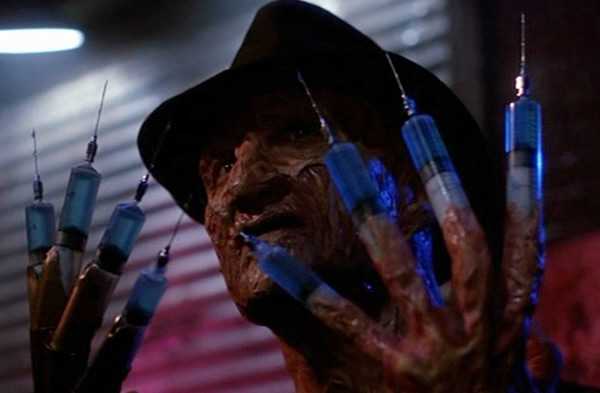 The smashing financial success of the original film made sequels a no-brainer.  Of course, A Nightmare on Elm Street franchise (and Freddy Krueger) would end up transcending movies and penetrating the larger pop culture scene internationally.  Despite Craven’s wishes, Nightmare would end up with six sequels, a cross-over movie with the Friday the 13th franchise, a 2010 remake, several television projects including an anthology series in the vein of The Twilight Zone, and countless toys, dolls and fan fiction installments.

A Nightmare on Elm Street Sequels
A Nightmare on Elm Street 2: Freddy’s Revenge (1985):  The first sequel had a much different vibe from the original, as Freddy haunts the dreams of the teenage boy now living in Nancy’s house.  Much more California than Ohio, this film also deals with issues of mental health and contains homosexual overtones (star Mark Patton is openly gay.)  The body count is not very high, but the film was still box office magic raking in $30 million against a $3 million budget.

A Nightmare on Elm Street 3: Dream Warriors (1987):  Featuring a rocking soundtrack which includes the title track by the rock group Dokken.  The plot revolved around a Freddy tormenting the mentally-disturbed teenagers of a psychiatric hospital, leading them to work together to fight the nighttime slasher.  The third installment is also significant for not only Heather Langenkamp reprising her role as Nancy, but also seeing the return of creator Wes Craven to the franchise as he co-wrote the screenplay.  Dream Warriors was released on February 27, 1987, and grossed $44.8 million domestically on a budget of over $4 million.

A Nightmare on Elm Street 4: The Dream Master (1988):  The fourth installment, The Dream Master, sees the return of several characters from the Westin Hills Psychiatric Hospital depicted in the previous film and their battles with the returning Freddy Krueger.  At this point, however, the gloved one has officially turned into a cartoonish caricature of his persona in the original film.  While still finding creative ways to kill these sleepy teens, the number of one-liners and silly scenarios playing out on screen begin overtaking the horror aspect of the franchise.  Writers Brian Helgeland and the Wheats Brothers were on to something, however, as The Dream Master earned a tad more at the box office than the previous sequel ($49.4 million vs. $44.8 million), though on a higher budget of $6.5 million.

A Nightmare on Elm Street 5: The Dream Child (1989):  Premiering on August 11th, 1989, The Dream Child earned the dubious distinction of the being the lowest-grossing Nightmare movie to that point.  The fourth sequel raked in only $22.2 million despite the larger budget ($8 million) and the return of the heroine of The Dream Master, Alice (Lisa Wilcox.)  Critics rightfully panned the film, calling it out for its convoluted story and near-complete absence of “scariness” factor.

Freddy’s Dead: The Final Nightmare (1991):  The franchise was provided a bit of a boost with the release of the fifth installment, The Final Nightmare.  Earning nearly $35 million at the box office, this sequel was New Line Cinema’s first 3D film and the intention was to end the series here.  Freddy battles the lone surviving teenager in Springwood and must confront his own demons or face extinction himself.  The Final Nightmare featured cameos by series original Johnny Depp as well as celebrities (at the time) Roseanne Barr, Tom Arnold, and Alice Cooper.  The title song was provided by Iggy Pop.  The intention to end the series, however, was dashed when the fifth sequel became a smash hit and the franchise continued on regardless.

Wes Craven’s New Nightmare (1994):  Choosing to blur the lines between story and reality, Wes Craven returned to the director’s chair for New Nightmare, considered the sixth sequel in the line.  Langenkamp and Saxon also returned, playing themselves rather than their characters from the 1984 film and weighing a decision to reprise their roles on screen when Freddy begins rearing his crispy head in their lives once again.  It was a new and interesting take on the Nightmare series; however, hopes for a franchise renaissance were put on hold when New Nightmare only managed to pull in $19.8 million in theaters (on a $8 million budget.)

Freddy vs. Jason (2003):  While not a direct sequel, Freddy vs. Jason is considered cannon in the Nightmare universe (as well as Friday the 13th.)  After years of message board discussion and fan speculation, the two iconic slashers were put into direct conflict as Freddy Krueger and Jason Voorhees faced off on the big screen.  Directed by Ronny Yu, Freddy vs. Jason would become a massive blockbuster for both New Line Cinema and Crystal Lake Entertainment and would wind up being the highest-grossing film for either franchise at $116 million worldwide.  This film is also significant as it marks the final time that Robert Englund has portrayed the Freddy character cinematically. 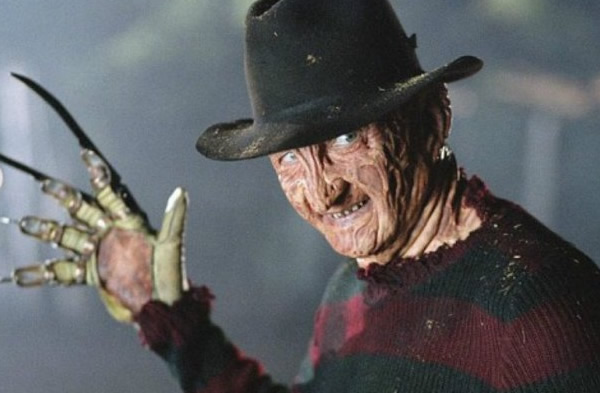 A Nightmare on Elm Street (2010):  A joint venture by New Line and Warner Bros. Pictures, the 2010 Nightmare remake would see Hollywood veteran Jackie Earle Haley slip into the role of Freddy.  Released on April 30th, 2010, the film would go on to gross $115.6 million against a budget of $35 million but was panned by both critics and audiences alike.  Many were put off by the inclusion of the child molestation storyline, as well as the role of Freddy being played by someone other than Englund for the first time in 26 years.

Freddy’s Nightmares (aka A Nightmare on Elm Street: The Series) (1988-1990):  Looking to capitalize the rising pop culture image of Freddy, New Line Cinema teamed with Stone Television and Warner Bros. to produce a weekly anthology series hosted by the horror icon.  The episodes revolved around different tales of terror, in the vein of The Twilight Zone and Tales from the Crypt, with only the first episode involving Freddy Krueger himself.  The comedic element popularizing the recent sequels was again portrayed by the gloved one, as the series ran in syndication from October 8th, 1988, until March 12th, 1990 for a total run of 44 episodes.

Freddy Krueger’s Body Count
Freddy turned slicing and dicing the teenagers of Springwood into an art form, though at times he would use a third party (such as Jesse Walsh from the first sequel, Freddy’s Revenge.)  A total of 42 people met their demise in the Nightmare franchise .  But whether it was in their dreams or in reality, Freddy always finished his prey with few exceptions.